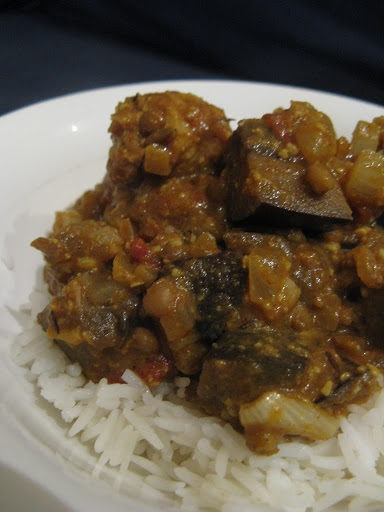 While the spiced eggplant salad was quite successful, by the time we'd eaten leftovers for lunch both of us were a bit sick of it. Unfortunately we still had half a saucepan full of the eggplant mix to deal with. Cindy suggested turning it into some sort of curry, and we combined it with the sauce from this recipe to polish it off. We also threw in a handful of Nutrella soy chunks to try to mix up the texture a bit.

It wasn't quite as successful as I'd hoped - the spice mix was a bit overwhelming and the soy chunks had a slightly weird flavour. Still, we managed to eat the rest of the eggplant, which we probably wouldn't have if it had stayed in salad form.
Posted by Michael at 9:35 pm