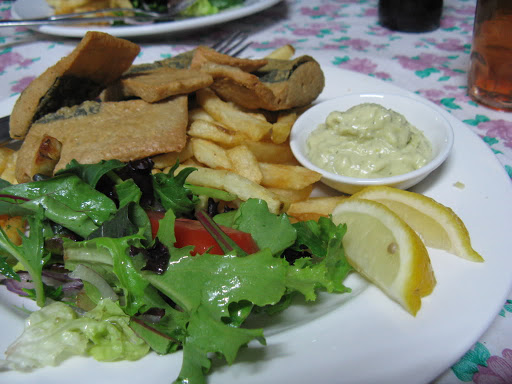 Yes, yes, this is our second visit to the East Brunswick Club within a week, but we had a good excuse - I'll get to that. Friday night saw a bustling pub and a full price menu. I took the opportunity to try their vegan fish and chips ($16), which comes with lemon, tartare sauce and a side salad. I'm pretty sure the 'fish' is the Lamyong product that I've bought once or twice before. It's chunky and very salty - not a particularly convincing imitation of a battered cod but rather addictive in its own right, especially when slathered in tartare sauce. The sauce portioning is quite reasonable, but sauce-fiend that I am, I wished for more to dip my chips into. Thank goodness for those lightly dressed greens to freshen everything up. 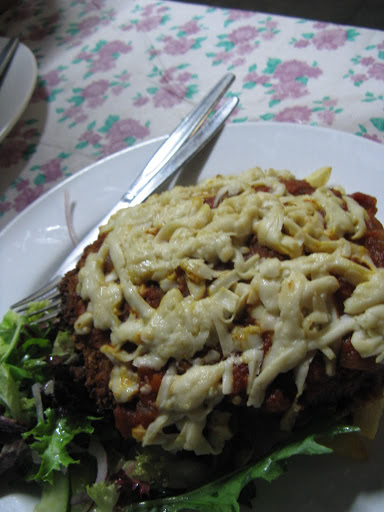 And here's a slightly better lit pic of the vegan 'chicken' parma, which goes for $17 when it's not on special. It's not as jaw-droppingly special at this price, but the EBC deserves props for offering such vegan-friendly pub meals all week long. 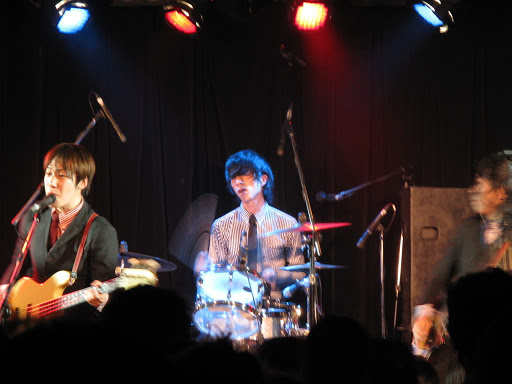 Our 'excuse' for such a quick return visit was to take advantage of one of the EBC's other features - the band room. Though we were expecting the Basics to light up our night, it was cute Tokyo interlopers the Bawdies who won our hearts and shook our fairly awkward hips.


You can read about our previous visits to the East Brunswick Club here, here and here.
Posted by Cindy at 5:06 pm