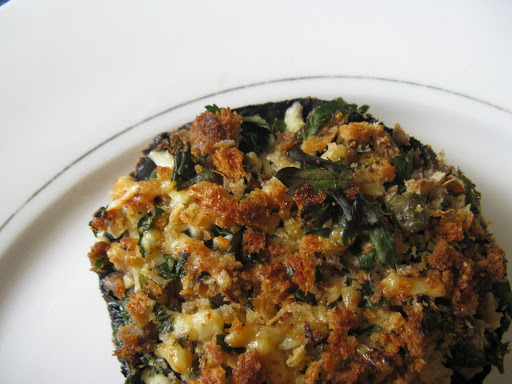 Internet-sourced recipes - write them down. I was all set to revisit those stuffed mushrooms that Michael made last year but beyond his positive review lay a dead link. I continued to search the site a while for the recipe, without success. Never mind, it turns out that stuffing vegetables is easy, reasonably quick, and can even take care of those leftover bits and pieces lazing around the fridge. I don't know why I don't try it more often. Here I pulled together a mixture of breadcrumbs, grated cheese, capers, parsley, lemon zest, garlic powder and pepper - it was a feisty combination, almost too salty, but memorable and worth repeating. If only I could remember the quantities! 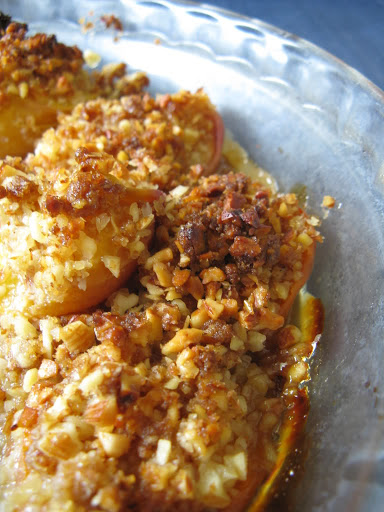 Actually, this was only the first course of a double-stuffed meal. We were enjoying the company of L, a long-time friend of mine from Brisbane, who stayed a couple of nights with us while chasing up a study opportunity in Melbourne. Just the excuse for a simple weeknight dessert, especially since I had some cream to use up. I keenly plucked my first stone fruits of the season (from a carton and not a tree, sadly) and wasn't quite as sad as I should have been that the peaches were rock hard and the nectarines not much better. I knew they'd go down fine after being baked under a crust of ground almonds, brown sugar, butter, ginger and nutmeg. The apricots, which were perfectly ripe to begin with, disintegrated into a delectable jam in the time it took the less ripe fruit to become tender.