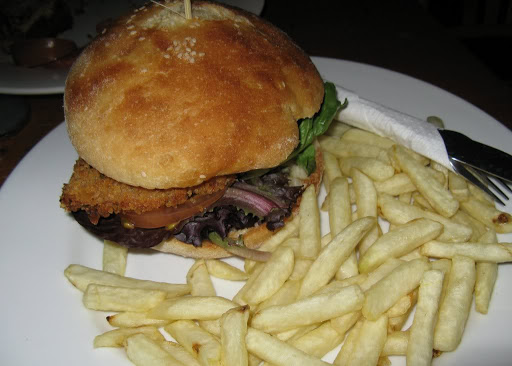 Our past couple of visits to the East Brunswick Club haven't exactly had us screaming for more. The first one, on a public holiday, went unblogged as we were dealt confused menus and embarrassingly poor service. Our second trip was more pleasant, but stopped short of really impressing. Yet a number of other bloggers couldn't stop talking about their Monday night meals. Were we actually missing out on something special here?

Well, kinda. The old hot dog night has diversified - now the EBC offers cheap jugs and four meals going at $10 apiece. We chose between:
While this is quite cheap, you might still be wondering what the big deal is. Here it comes: you can order any of these meals vegan. Any of them. A cheese and bacon burger without the, uh, cheese and bacon. Lime mayo that's got no business being free-range or otherwise. Spaghetti sauce that's never seen a feedlot!

But why? Why would the East Brunswick Club bother? Stop by on a Monday night and you'll see. The place is packed. We were barely able to snag a table for two, and we were there before 7:00. As we waited for our meals Michael, ever the statistician, kept tabs on the plates emerging from the kitchen, estimating that 80% of them were 100% animal-product-free. The EBC has found a gap in the market, and is hopefully making a tidy profit by filling it. It doesn't matter a jot what a non-vegan like me thinks of the food. 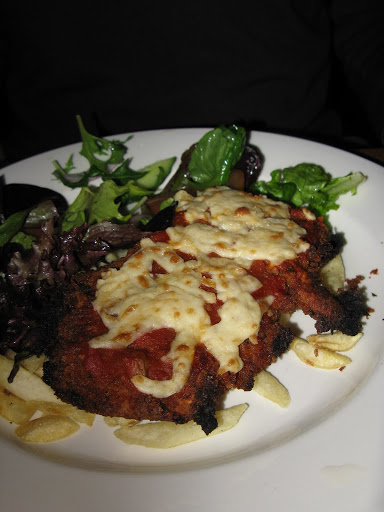 You know I'm going to tell you, regardless. The kitchen is clearly overworked at a time like this and what comes out of it is good - not great, but good. The 'chicken' is tender and moist but kind of fatty; the chips could be better. And there was a 20 minute gap between Michael's parma arriving and my chicken burger's entrance - boo. But the crumbing is so darn crunchy, and just how do you get vegan cheese like that? It's cool. 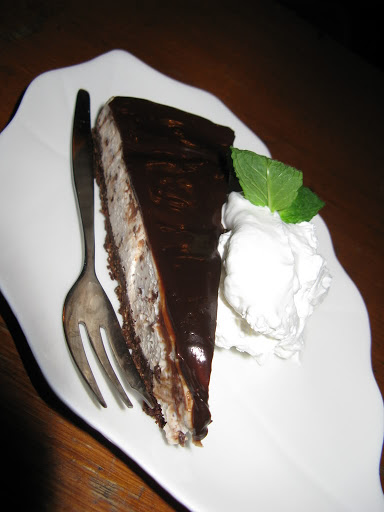 The gluttony need not even end there, because dessert's $8 and guess what? It's all vegan, all the time. There's:
I really dug the choc-mint cheesecake - just stay away from the 'cream'. (I'd advise precisely the same thing at any number of non-vegan venues.)

Cheers to the East Brunswick Club - they've proven that the greasy pub dinner is not the exclusive territory of Australia's carnivores.


You can read about one of our previous visits to the East Brunswick Club here.
Posted by Cindy at 8:02 pm