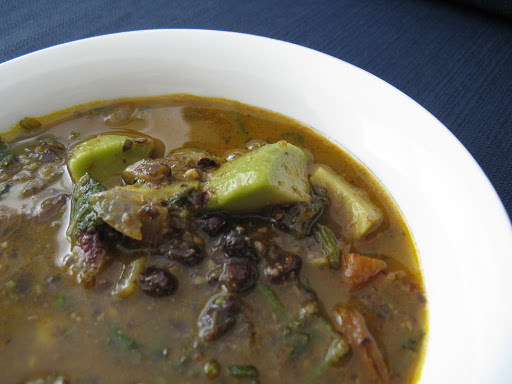 We'd loaded up on goodies at the Queen Vic Market on Saturday and had decided that we should buy some dried black beans and then get ourselves organised enough to actually use them. Thus, by the time Monday rolled around we'd had a couple of cups of beans soaking for a good 30 hours and were ready to turn them into dinner.

My first port of call for Mexican-y recipes is Ken Charney's Bold Vegetarian Chef, possibly my favourite in our cookbook collection. He didn't disappoint, providing us with a recipe for 'Beautiful black bean and avocado soup'. It all took a bit longer than I imagined it would - despite our preparedness, I didn't realise how long the pre-cooking of the beans would take. I had them simmering for about an hour, but they still ended up a little bit firmer than I'd have liked. Still, that was the only minor complaint about this meal (well, that and its lack of visual appeal).

The soup had a spicy zing, complemented by the citrus tang of the lime and the coriander. Throw in the rich, dark beans and the fresh ripe avocado, and you've got yourself a delicious treat. I probably went a little overboard on the spices, which meant that the spice range was a bit beyond Cindy's preference, but I enjoyed it very, very much.

In a large pot, heat the oil and fry the onion for about 5 minutes - until it's soft.
Add the garlic, cumin, achiote, cinnamon sticks, sugar, salt and half of the coriander. Cook, stirring often, for a couple of minutes.

Throw in the tomatoes and beans and stir everything together. Cook for a couple of minutes and then pour in the stock. Bring to the boil and then simmer for about 20 minutes.

Take out a couple of cups of beans and liquid and puree them in a food processor, and then stir it back into the pot.

Cook for another few minutes and then kill the heat. Add the avocadoes, lime juice and the rest of the coriander and stir it all together with a bit of salt and pepper. 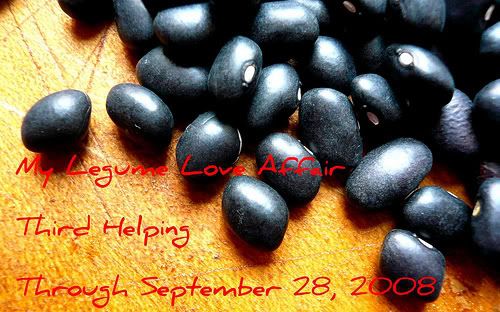 This is our entry in this month's Legume Love Affair, started by The Well-Seasoned Cook and hosted by Lucy at Nourish Me.
Posted by Michael at 11:16 am