Even though we hit the jackpot last time with De Orchid, Cindy and I thought we should try out Spicy Junction (which was closed for renovations at our last attempt). The menu promised a range of vego curries for the same kind of prices that most of the local Indian shops offer. 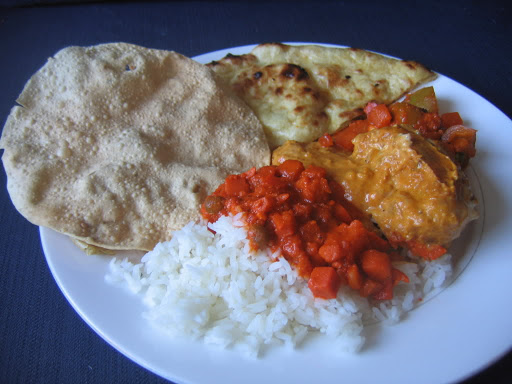 I decided to sample three (enough to ensure that we'd both get lunch the next day): the vegetable vindaloo, the navratan korma and the malai kofta. They were all... orange. I was surprised by the orangeness of it all, and Cindy was surprised by the kick in the vindaloo (which was supposed to be mild). The vindaloo and the korma were both full of the kind of small vegie cubes that instantly remind me of McCains frozen vegetables, even if they've been freshy chopped. The tiny chunks also tend to remove any scope for differentiation, so that each mouthful is just orange 'vegetable'. I much prefer chunks of plainly identifiable potato or cauliflower. The kofta fared a little better - creamy and delicious, but there was something disappointingly doughy about the actual vegie ball. I've got no complaints about the bread, and the staff were really very friendly, but the curries here just don't measure up to what we scored from De Orchid last time. I think the quest for a great local Indian place may finally be over.