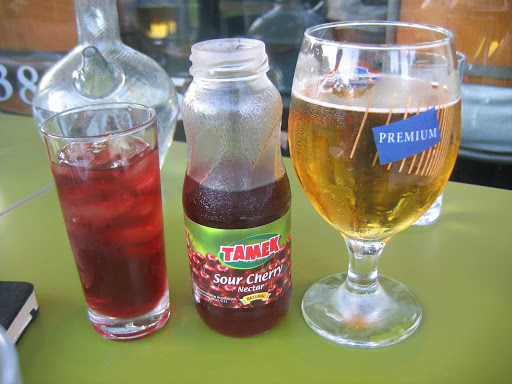 We're a bit slow off the mark. Rumi burst onto the scene in late 2006 and has received glowing reviews from The Age and just about every food blogger in Melbourne. It's right on Lygon Street, a mere 5 minute bike or tram ride north of our house and it's in the East Brunswick strip that we frequent fairly often. So why have we taken so long to get there? Disorganisation. Rumi became so popular so quickly that, by the time we'd heard about it, you had to book weeks in advance to get a table. And we just don't function well on that kind of timeframe - we can't even shop more than a day in advance.

Anyway, a couple of old friends of mine were in town on Wednesday and, with my usual foresight, I rang Rumi on Tuesday evening to try to book a table for the next night. They offered us a place, provided we could be out by 7:30. I made the promise without consulting anyone else and crossed my fingers that we could all turn up by 6 or so and have sufficient time to really explore the menu. Unfortunately, while I enjoyed one of their Turkish beers, Ben and Laura were stuck in a cab trying to make their way out to Brunswick. By the time they arrived, it was well after 6:30 and I was a bit tense that we were going to end up spending our meal rushing through the courses. Instead, we opted to move to one of the outdoor tables - these are unbookable and are there for the few walk-ins who take their chances. Luckily we claimed ours early and could sit back and relax for the rest of the evening without worrying about eating quickly or getting out on time. Excellent! The staff were very helpful throughout all of this - not at all grumpy at us for messing up and breaking our promise to be out of their hair early.

Our waitress was also exceedingly helpful when it came to ordering. We explained our situation: two vegos, two non-vegos (who were mostly sympathetic to our meat-free agenda) and four reasonably hungry people. After getting the complete run-down on our options, we settled on four of the smaller dishes (all vego) to share between the four of us and a main for each couple (Ben and Laura couldn't refuse the lamb koresht). 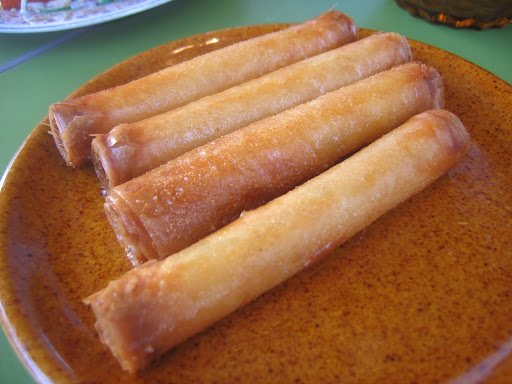 The small plates came out at reasonably regular intervals (along with some rolls of pita bread). The first plate came out with four little cigar-shaped pastries on it: sigara borgeri ($9.50) - pastries stuffed with three kinds of cheese (haloumi, feta and kasseri). These were a pretty great start to the meal, but were slightly let down by coming so soon after the amazing sambousik at Cafe Zum Zum. Still, that's like saying Degrassi doesn't quite measure up to Press Gang or that Breakfast of Champions isn't as funny as Catch-22 - it's barely even a criticism. 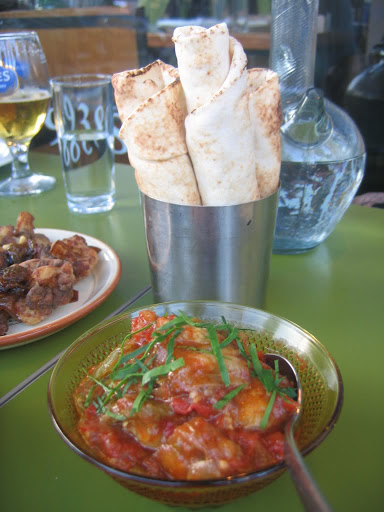 Next up came a couple of plates together - the eggplant m'nazleh (eggplant and green pepper braised with tomato, $10.50) and the fried cauliflower (with onions, currants and pinenuts, $11). The eggplant was soft and mushy - the best accompaniment for the pita breads of all our small plates. It was delicately flavoured - lightly spiced and a completely delicious. It's quite oily, but that works well in small doses smeared on bread. The cauliflower was probably the highlight of the evening. Somehow they'd gently cooked the florets until they were a bit on the soft side and then charred quickly to blacken up the edges and give them some crunch. The onions, currants and pinenuts added a bit of texture and flavour, but the florets could have stood alone - they were amazing. 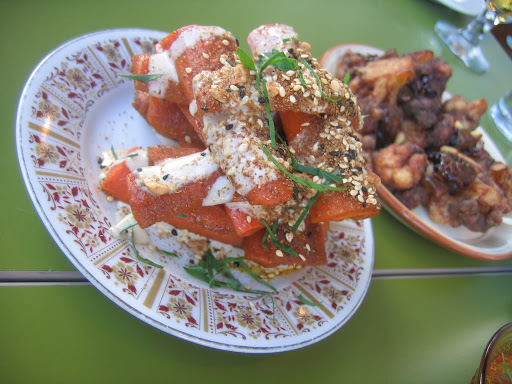 The final small plate was the roasted carrot salad (with tahini, dukkah and parsley, $11). It was the most impressively presented of the plates: a little cross-hatched tower of carrot with generous sprinklings of dukkah and flat-leaf parsley. The carrots were cooked until they were as soft as they could be without falling to pieces and the carroty flavour was the perfect complement to the tart tahini. 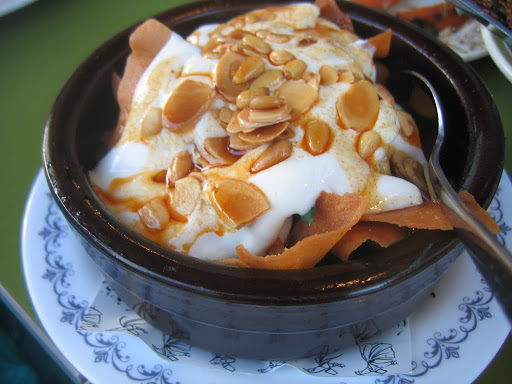 Next up was our main - the only vego main on the menu, the vegetable fatteh (with pita, chickpeas, silverbeet, parsley and tahini yoghurt, topped with nuts and smoked paprika, $17). Again, this invoked obvious comparisons with Zum Zum, but I think on this occasion Rumi won the day. The crispy pita pieces, divine yoghurt, chickpeas and the delicious paprika-y nuts on top. We had no problems polishing this off (and even managed to share a few spoonfuls with our meat-eating friends). 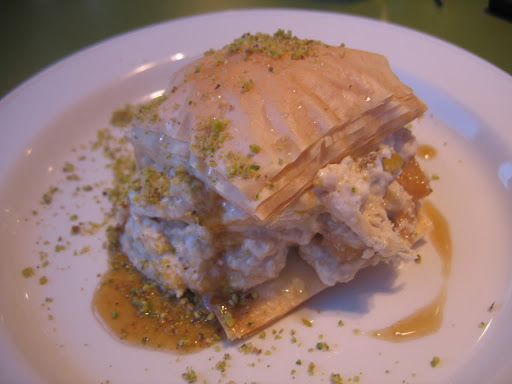 By this stage of the evening it was pushing on towards 8, but our table switcharoo meant we had time to sit back and peruse the dessert menu. It was a fairly sparse menu: three small options and two more 'main' sized choices. Cindy couldn't resist one of the more substantial items - the Martyr's Square (with ashtar, caramelised banana and pistachio halva, $10.50). Despite my anti-banana agenda, this looked pretty good - rich cream, delicate pastry and a nice dusting of pistachio sprinkles. Unfortunately it was all filled with squishy, gross banana. Cindy seemed to enjoy it. 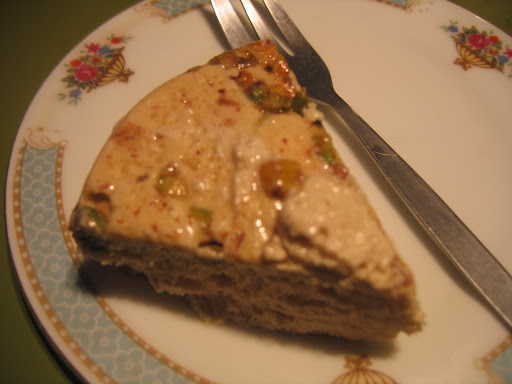 I decided to aim smaller and just ordered a small piece of pistachio halva ($4). This got lost somewhere in the ordering process, but it eventually turned up while Cindy was polishing off the last of her larger treat. The halva was a little on the dry side for my tastes - I can see how it would work better as part of a creamier dessert, but on it's own it would be better shared between two.

We topped things off with Lebanese coffees and a quiet drink across the road at Atticus Finch. After such a long wait and such a lot of hype (most recently winning The Age's Cheap Eats restaurant of the year award), it was always going to be hard for Rumi to measure up. Luckily, it went pretty close to my expectations: great service, wonderful little plates of innovative Middle Eastern cuisine, a delicious vego fatteh and a bustling, pleasant atmosphere. The only downsides: not as many vego mains as I'd hoped and a slight shortage of dessert options. Still, we'll be back - especially now we've learned that you can turn up early and snaffle one of the non-bookable tables at short notice.