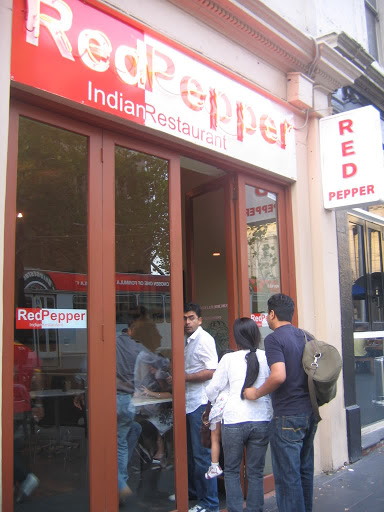 At the eastern end of Bourke St sit three Indian restaurants in a row: Red Pepper, Jaipur Curry Bar, and Green Pepper. Mellie recently recommended them to us, so Michael and I met up there for an early dinner in 36-degree weather before our second night at the theatre. Green Pepper was closed so we were faced with a choice between Jaipur and Red Pepper. We picked the latter because I knew it was one of the Peppers that offered Mellie's favourite naans. It was the wrong Pepper but never mind - the naans here were great! 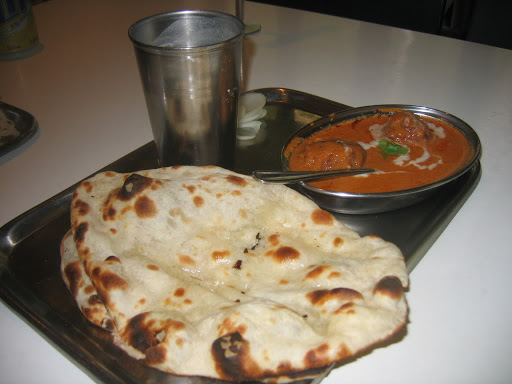 Red Pepper is in fact a sister restaurant to Green Pepper, which might explain why we encountered excellent naans and rudimentary service eerily similar to what Mellie described. The atmosphere is no more sophisticated than a cafeteria - line up to order from the couple of menus or the chalkboard of specials, then take a number and a seat at a vacant table. If you're lucky the table will be wiped and there'll be a few napkins in a holder, but don't count on it!
Red Pepper is clearly popular with the local Indian community. As we sat down at our own napkin-less and not-yet-wiped table, we noticed that we were the only white kids in the shop. I remembered, then, that the menu didn't offer entire descriptions of dishes in English. Although the meat type is identified, it will help to know your aloo from your vindaloo.
Neither of us could go past the curry-and-two-naans specials. As already mentioned, the naans are fantastic, arriving fresh and hot and crispy. I chose the malai kofta ($9, pictured above) and received two sizable koftas in a sauce the equal of any I've slurped in Melbourne. As I write this, Michael is drooling over the memory of his paneer tikka masala ($10, pictured below). Both plates came with a 'salad' of a few raw onion rings and a cup of I-don't-know-what: its consistency was that of watered-down milk and it was a bit tangy. An unfamiliar lassi? I dunno, but it wasn't quite to my taste.

I'm no expert on these things, but all signs point to Red Pepper offering authentic north Indian food. But I've seen and tasted all I need to proclaim the price is definitely right! You'll get and fast and tasty feed here. 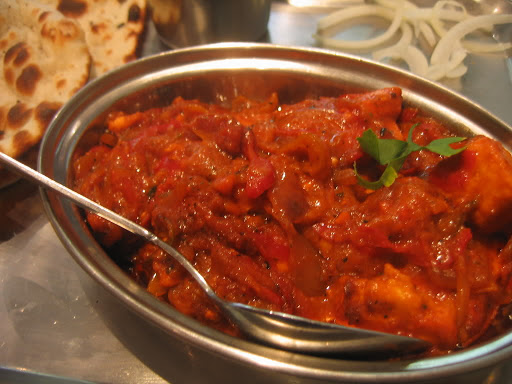