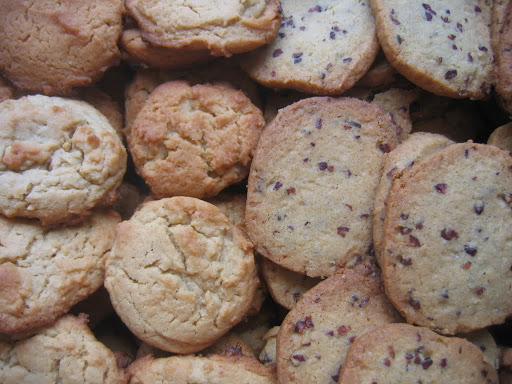 I recently and hesitantly volunteered to be the seminar coordinator in my research lab. It needn't be a particularly difficult or time-consuming job, but it may challenge my initiative later on when the supply of guest speakers that my seniors have been supportively pushing my way finally peters out. Then it'll be time for me to begin nagging my co-workers to speak! With this in mind, I decided to butter them up early with two kinds of buttery biscuits at our first gathering.
On the right are buckwheat butter cookies with cocoa nibs, originally posted and raved about by Molly of Orangette. They are buttery indeed, and the buckwheat flour adds an interesting texture. However I found that the earthy flavour of the cocoa nibs got a bit lost, and I wasn't won over by their sandiness (though Clotilde no doubt would be).
On the left are peanut butter cookies from Smell & Taste Are My Memory. I found my dough to be too gooey to create the pretty cross-hatches on Lao Cha's cookies, but I otherwise followed the recipe to the letter. Initially I was disappointed that these were more crunchy than chewy and I found them a bit dull without extra chocolate chips or nuts. However, they really did grow on me, until I was eating far more in a sitting than I'd care to admit to!
Everyone was grateful for my efforts, and there were abundant leftovers for the biscuit jars both at work and at home. With a few keen cooks in the group, there's even talk of getting a baking roster together for future seminars. With this level of appreciation and support, this new task could be a breeze!
Posted by Cindy at 6:57 pm