Once a week, on Tuesdays, I share my office space with L. We're involved in different projects and spend most of our time quietly getting them done, but we've also established some common ground. She's always knitting cute socks and is apparently a very good photographer (I don't doubt it, though I've not yet seen any of her work). L has enthusiastically discussed the pictures I've hung on my side of the room and has a huge appreciation for fine food - at last year's Christmas party, we spent 20 exquisite minutes devouring roughly half a wilted (but still excellent) Bûche de Noël.
This week L gave me something very special. 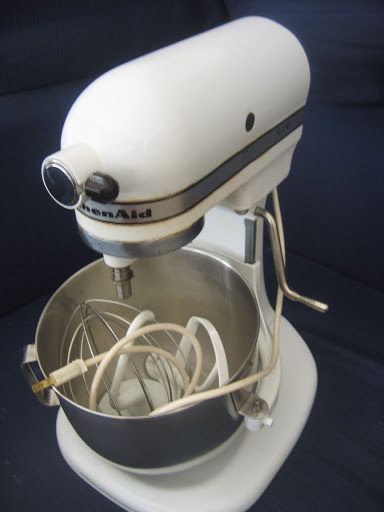 This is the KitchenAid mixer that she has owned for 30 years. When she first had it she had been married about two years and was living in Boulder, Colorado. It was the launching point for a lot of baking. "Oh, the butter I've creamed, the cream and the egg whites I've whipped with this!", she marvelled. In the following years she had two sons and their first experiences of cooking were with this mixer. 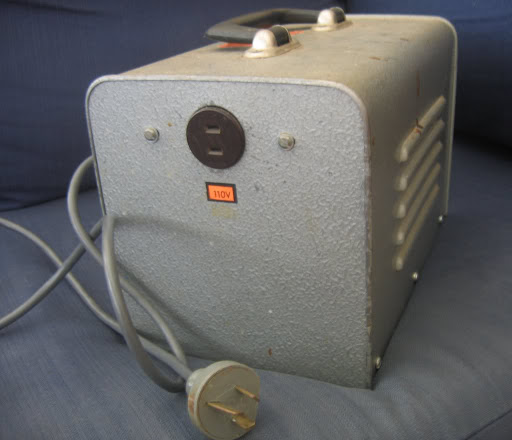 By the time one of them was in kindergarten, she had moved to Australia and needed this transformer to convert the KitchenAid's voltage to suit Australian power points. (It's far heavier than the mixer!) Similarly, she embarked on the process of transforming her North American recipes to suit what was available in Australia, like the sugary chocolate instead of the unsweetened and bittersweet varieties she was accustomed to. For birthdays and fetes she baked brownies and cupcakes in little paper cases - at that stage unknown and most impressive to the Aussie mothers. For her part, L was bamboozled by fairy bread and lamingtons.
L's sons are now both in their twenties, and she doesn't have the back strength to heft the KitchenAid onto the kitchen bench. Instead she relies on a hand-held mixer she bought ten or fifteen years ago. So she offered it to me, keen to see it inherited by someone who'd use and value it as much as she did. As she took me to her car and dropped me and my new mixer at my house, she told me these stories about her mixer that had returned as she packed it up.
I couldn't think of much more to do than to thank her, and promise that I'd whip up some more memories with it. "I know you will," she replied. "That's why I'm so excited for you to have this!" 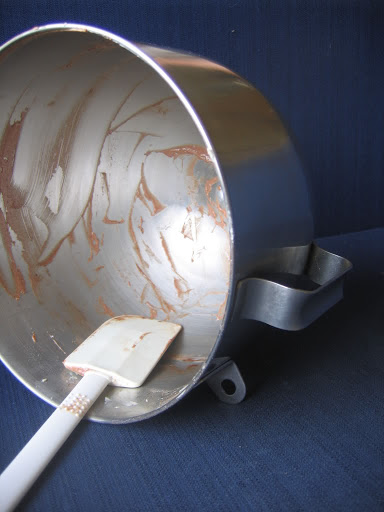 So, what was the first recipe I mixed up with my new-old KitchenAid? You'll have to wait a few days to find out...
Posted by Cindy at 5:41 pm