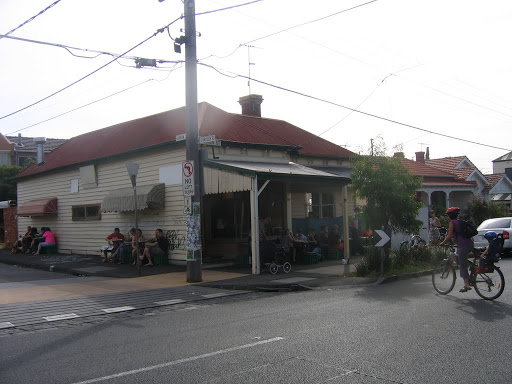 Melbourne's inner-north must have the highest density of good to excellent breakfast places in the world. We've already had tremendous breakfasts at more than a dozen places in Fitzroy, Carlton, North Fitzroy, Carlton North, Brunswick East and Brunswick and there's a long list of places still awaiting our attention. Last Saturday we finally made our way to A Minor Place tucked away in Brunswick between Lygon Street and Sydney Road. And then we decided, like Homer Simpson before us, we're doing it twice.

There's really not much else on Albion Street, so A Minor Place seems to draw in all the gentrifying folk in the neighbourhood for a morning coffee or a bite to eat, meaning that, by the time 9:30 rolls around, things are getting pretty full. We snaffled one of the outdoor milk-crate tables on our first trip and squeezed a group of six around one of the slightly more comfortable inside tables on the Sunday. There's a particularly strong demand for their coffee, with locals staggering in bleary-eyed and then stumbling off home with a latte-loaded tray, so the obligatory flat-white takes a while to turn up. Luckily it's worth the wait, a smooth caffeine kick that basically demands you order a second. 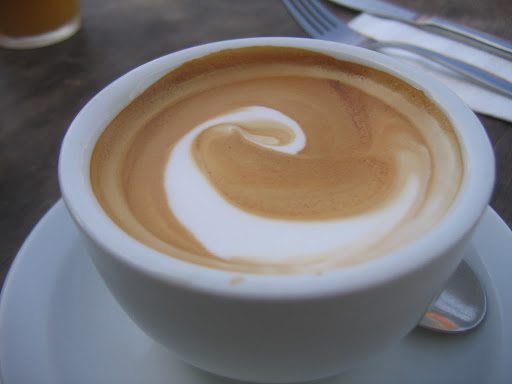 The menu is fairly short, but is rich in vego options - I think only two of the regular menu items are meaty, meaning Cindy and I had plenty to choose from. They've also got a small specials menu (which was entirely vego last weekend) and a few muffins and cakes on offer at the counter. On the Saturday morning we were both in a savoury mood: a New York Style bagel ($7) for Cindy and a pumpkin cornbread based feast ($11) for me. 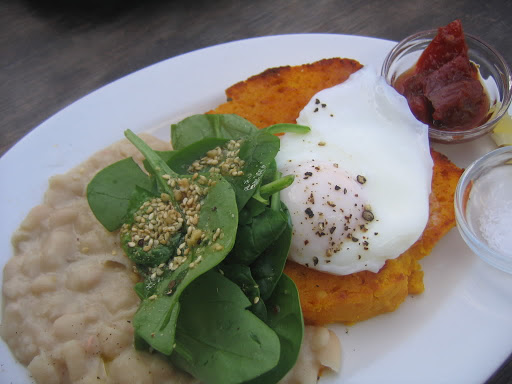 The cornbread came topped with a poached egg and some spinach with dukkah sprinkled over it, along with a decent scoop of Henry's white beans and a small container of currant relish. Look at it - what a nice, colourful plate! The bread was crumbly and maybe a little on the dry side, but once it was drowned in eggy goodness and slathered with the incredible beans (seriously - these beans are in four of the menu options and they are divine), it served its purpose (soaking up the flavours) very well. The relish was sweet and tasty and the greens let me pretend I was having a healthy breakfast. 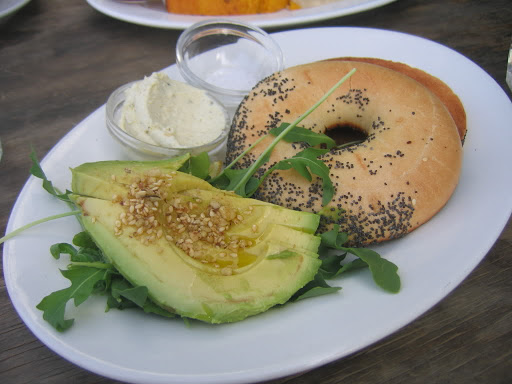 Cindy's bagel offered no such pretense. A doughy, chewy bagel served up with a generous dollop of peppercorn cream cheese and half an avocado. I only managed a taste of the cream cheese (excellent), but Cindy's vociferous recommendations to our breakfast buddies on the Sunday morning suggest that she was quite a fan.

Mike and Jo had been the chief source of recommendations for A Minor Place, so when we mentioned to them at dinner that we'd finally visited, their enthusiasm took over and they insisted we return for a second shot on Sunday morning. Neither of us were complaining. 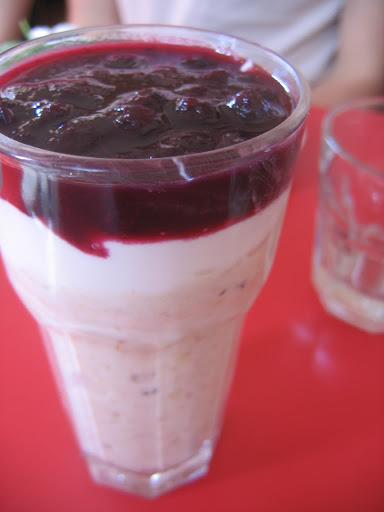 Cindy decided that, between the New York bagel and the churros, she'd had her fill of unhealthy food for the weekend, and settled for the Bircher muesli ($7). The muesli came out in a tall glass, which looks fantastic, but makes it harder to distribute the berries throughout the muesli mix. I think she really enjoyed the first third, was quite happy with the middle third, but a combination of fullness and lack of variety meant that the bottom third was a little disappointing. That's what you get for trying to be healthy. 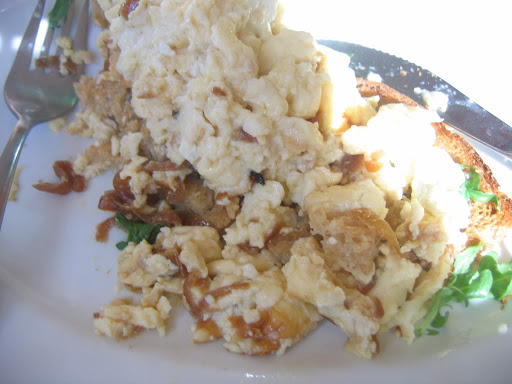 I turned to the specials menu and ordered the caramelised onion and feta scrambled eggs on toasted wholegrain ($10.50). A combination of my hunger and the aroma of the onion-flecked eggs meant that I temporarily lost my mind and dove in before I'd taken a photo. Just when I'd started boasting to friends that I'd finally been trained to wait until the camera was off before disturbing the food. Ah well. As you can see from the wreckage of my breakfast, there was plenty of soft, sweet onion throughout my eggs and the occasional chunk of feta. I'm not usually a big scrambled eggs fan, but these flavours worked well together and I polished it off in no time.

A Minor Place is another of the trendy, slightly cooler-than-thou places that are scattered across Brunswick - the service was friendly and reasonably efficient, the menu as veg-friendly as we've come across for brekkie and the food was excellent across the board. Now that I've spent ten minutes linking to all the places we've yet to visit I'm not sure that we'll be back at A Minor Place in the near future, but that's a product of this area's riches rather than any flaws in the cafe itself.