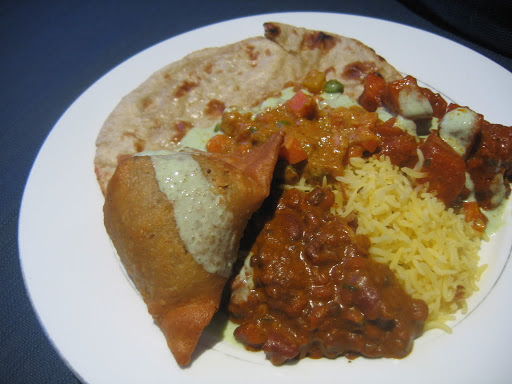 It seems we've finally settled on a local Indian takeaway place, with our second visit in three takeaway trips to De Orchid on Rathdowne Street. The intermediate stop (at Spicy Junction) had been a bit of a letdown, so it was wonderful to go back to De Orchid and find three more delicious takeaway vego curries for our delectation. We decided to try totally different menu items to last time, going for: a serve of samosas ($3), daal maharani ($8), pumpkin masala ($8.90), navaratan korma ($8.90) and a roti bread ($2).
The samosas were a fairly standard smooth vegie mush, with a generous scattering of coriander seeds throughout and a lemon-minted raita. Very tasty. The daal was thick with chunky lentils, had a mild flavour and some easily dodgable chunks of fresh tomato. It was probably a little on the stodgy side, but that's what you want from a daal really.
The two vegie dishes were the stars: the korma had the finely chopped vegies that too easily remind me of frozen mixed vegies, but were much more obviously freshly chopped than Spicy Junction's efforts. The flavour was also more impressive - well-spiced and creamy. The description in the menu promises dried fruit, but Cindy and I only noticed one sultana between us. Which wasn't really a problem - sultanas in curry remind me too much of Keen's Curry Powder style stews. I liked the pumpkin masala best of all, but unfortunately (from her perspective anyway - it just meant more for me) it was a little on the hot side for Cindy's taste. The pumpkin hadn't melted into the gluggy mush that overcooked pumpkin can, instead coming in well-cooked tender chunks. The sauce (the chef's own apparently) was rich with both spices and spicyness - it was hot, but there was some depth to the flavour as well. We might have to ask them to tone the heat down a little next time, but I'm nominating it as a dish worth repeating.
When I went and picked our dinner up, we were given an inexplicable 10% discount. Just now, on closer examination of the takeaway menu, I've realised two things: they offer free, fast home delivery and they give 10% discounts for picking up takeaway orders. It's so close to our house that it seems wasteful to have them drive it over, but it's nice to know that if we need curry on a rainy winter's night, De Orchid will bring it straight over.
Read about our first visit to De Orchid here.

Another thing we discovered on their takeaway menu: De Orchid's website.

Update 4/9/09: After being 'temporarily' closed for nigh on a year, De Orchid has recently reopened. My first impression: things have gone down hill - but we'll probably give them another chance and write a proper review.

Update 10/2/10: It appears that De Orchid is no more at this address. There's an Indian restaurant with a different name in its place, and we've not yet tried it. It's unclear whether the De Orchid has changed names, changed locations or disappeared entirely.
Posted by Michael at 10:50 pm