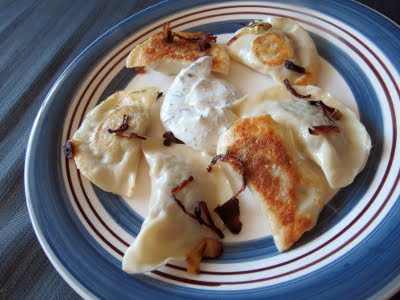 Fridge full of vegan sour cream and dill? This called for pierogi, or at least something approximating them. I would probably disapprove of the double-barrelled starchiness of dumpling stuffed with potato, but the Poles have legitimised it and I have eaten it and loved it. They could be appetisers, satisfying snacks or a rolling-on-the-floor-clutching-your-belly gorge-fest depending on when you manage to stop.


Dough: round and wanton wonton wrappers. Because I'm not rolling dough.


Method: Mix together the filling ingredients, spoon them into the dumpling wrappers and seal into semi-circles using a wet finger. Boil the dumplings until they rise to the water's surface, then fry them on one side in butter or oil until golden. Plonk them onto a plate and garnish with the toppings. Eat with forks or fingers.
Posted by Cindy at 8:10 am