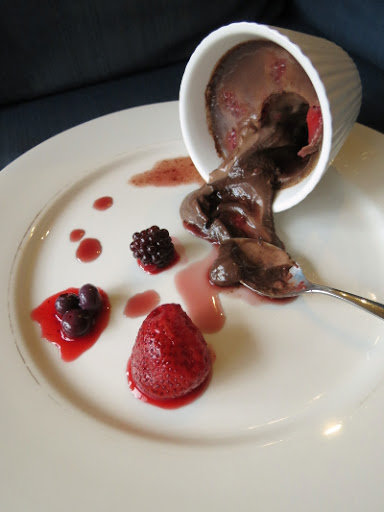 Bhakthi has invited us back to her Cook The Book segment on RRR this morning, and this time we're talking about The Cook by Wayne Macauley. (And here it is, archived online.) The Cook is Zac, a troubled (and presumably troublesome) youth offered a second chance at Cook School. Here he learns of paddock-to-plate high-end dining: growing and harvesting produce, raising and slaughtering animals, slicing and cooking his ingredients just so and serving them to the rich and bored.


Zac channels his ambition into celebrity Head Chef's philsophy: power through service. He's willing to subjugate himself and sacrifice everything else he knows to get ahead in the industry and ultimately dictate his tastes to the wealthy. The narration, almost entirely free of grammar, has an urgency and honesty to it. Still, I often caught myself wondering what Zac wasn't telling us. In the end we discover all we need to. While this book is ostensibly about the food industry and steps through Zac's work in detail, its core is a savage commentary on extravagance amongst the privileged.


Making a recipe to suit the book (or actually blogging at all) would probably provoke some choice words from Wayne Macauley but I'm willing to press on. Most of the food prepared in The Cook is meat, and the reader isn't shielded from where it comes from (this is probably why several reviewers suggest that it's not a book for vegetarians). One of the few desserts that Zac prepares is individual baked French chocolate custards. While he garnishes them with rosemary flowers, I thought I'd hide some bloody, fleshy berries in mine as a nod to the meat he's more preoccupied with.


The recipe is based on one by David Lebovitz. I upped the quantities to ensure that I'd get 6 serves but need not have bothered - I filled 6 ramekins and 2 small teacups in the end. My berries and cherry syrup mixed themselves up in the too-runny custard instead of lurking down below in a layer as I'd intended, and I just plain forgot to add the vanilla. Whoops. I'd never make it in a professional kitchen, but I can rely on dark chocolate and heavy cream to carry through my more modest culinary ambitions.

(If you're interested in making a vegan version, you can use these two past recipes as a reference.) 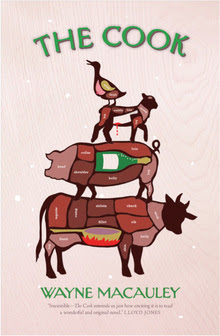 The Cook's chocolate pots de crème
(based on David Lebovitz's recipe in Ready for Dessert,
sourced from Playing with Flour)


Preheat an oven to 180°C. Get 7-8 ramekins or other oven-proof cups out, plus a high-walled baking tray that can hold them. Make sure you have all your other ingredients prepared and at the ready, you'll need to call on some of them quickly. Place the egg yolks in a large bowl and set them aside.


Pour the milk and cream into a large saucepan and add the sugar, coffee and salt. Stir them together over medium heat until they're well mixed and hot. Turn the heat down to its lowest setting and add the dark chocolate, stirring it constantly until melted through. Turn off the heat immediately and allow the mixture to cool to lukewarm.


Divide the berries and cherry syrup amongst the ramekins. When the chocolate mixture is the right temperature, whisk it into the egg yolks. If the mixture looks uneven, strain it. Pour the chocolate custard into the ramekins and arrange them in the baking dish. Fill the dish half-full of warm water and cover the ramekins with foil. Bake them until set around the edge but still wobbly in the middle, 35-45 minutes. Allow them to rest and set before serving, either warm or cold from the fridge.
Posted by Cindy at 7:39 am