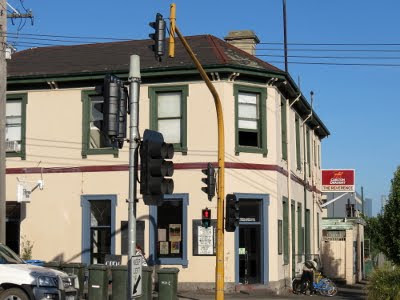 We'd been hearing a few rumours about the vegan-friendly Mexican-inspired menu that had popped up at The Reverence Hotel in Footscray, so when The Moody Noodles invited us over to the west to check it out we trekked on over. The Reverence is the new(ish) home of the peeps who used to run The Arthouse in North Melbourne, and along with live music and decent beer, they've got a veg-friendly menu going. And they've clearly struck a chord - they were doing a roaring trade on Boxing Day, with a mix of hipsters, veg*ns and a handful of more old-school Footscray peeps filling every available space.

Thursday through Sunday they offer pizzas, empanadas and a few other nibblies, with plenty of vegan and gluten-free action (including an intriguing-sounding 'ham' and 'cheese' option). They also have a cheap taco night to coincide with their Tuesday trivia. For obvious reasons, they postponed the scheduled Tuesday trivia to Wednesday, meaning we could dive into some cheap Boxing Day tacos We didn't stick around for trivia, at least partly because it was crammed with people, leaving us out the back in the courtyard. 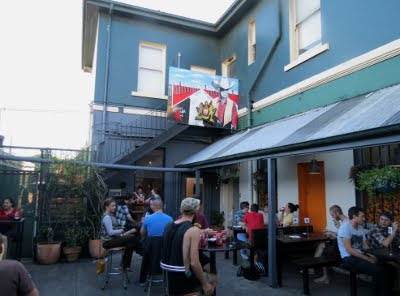 The tacos come in two veg and two meaty varieties. We gave the veggie options (both vegan and gluten free) a good going over, with seven tacos ($3 each) proving enough to satisfy the two of us. I was most enthused by the tofu tacos - pan fried tofu, with smoky paprika, crunchy coleslaw and coriander, served with chipotle lime mayo. They were generous with the paprika, which gave the mashed up tofu a lovely smoky flavour, which went brilliantly with the acidic coleslaw and creamy mayo. As with all tacos, they were improved even further with a generous shake of hot sauce. 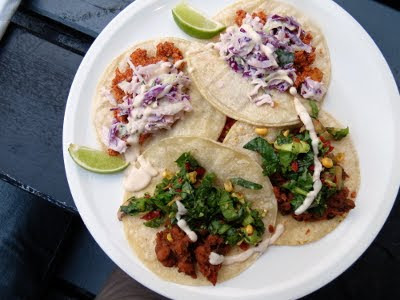 Cindy was more enamoured by the bean tacos: black and pinto bean mush, with spinach, corn, avo and pumpkin salad, served with the same chipotle lime mayo. While I preferred the tofu, these were still pretty good - a nice hefty bean filling and some fresh salad - I just had the feeling that we could probably churn these out at home.

The staff were efficient and friendly, even while slammed with the taco desires of seemingly every hipster in Footscray. Throw in $3 Tecates for the evening, and The Reverence cheap taco night seems like a pretty great reason to cross the Maribyrnong.
____________

The Moody Noodles have already got their review of our visit up, while The Good Hearted beat us both to the punch.
____________

Accessibility: There's a small step at the (narrowish) front door, but the side door is flat and wide. Inside things are fairly spread out, with at most small steps between the bar, side-room and courtyard. We ordered and paid at the bar, and didn't visit the toilets.
Posted by Michael at 8:18 am