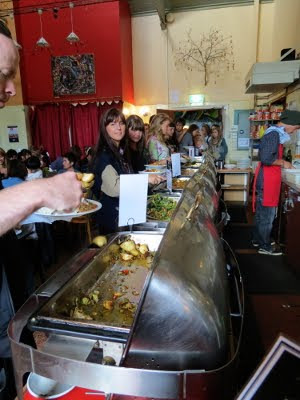 Most Melburnians are familiar with the Lentil As Anything not-for-profit organisation and its eateries. They aim for inclusiveness and a sense of community amongst their (largely volunteer) staff and their diners, who are asked to pay what they feel at the end of their meal. 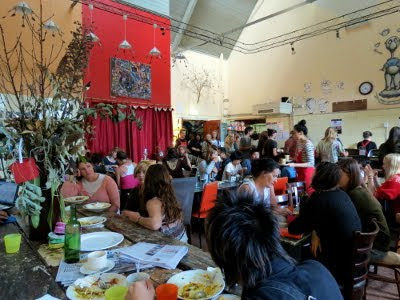 We visited the now-defunct Lentil As Africa when we first moved to Melbourne, tried the St Kilda restaurant the following year, and met fellow food bloggers at the Abbotsford Convent buffet in 2008. Another Outspoken Female recently mentioned to us what a good meal she'd had at the latter location, so we stopped by to fill up before a film at the Shadow Electric.

Past issues with unexpected ingredients have been addressed well. Everything's vegetarian and each dish at the buffet has a label with its name and key dietary pointers (vegan, gluten-free, nuts, etc.). It was majority vegan and gluten-free on this night. 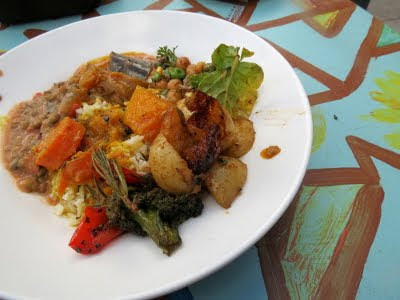 The food has a home-cooked, comforting style. I tried a little bit of everything - three Indian-style curries, aromatic rice, a chickpea salad and my favourite: rosemary-spiked roasted potatoes. 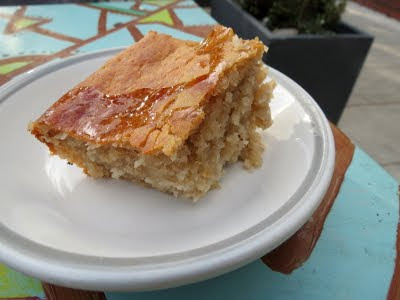 For dessert there was a fluffy and sweet banana cake. 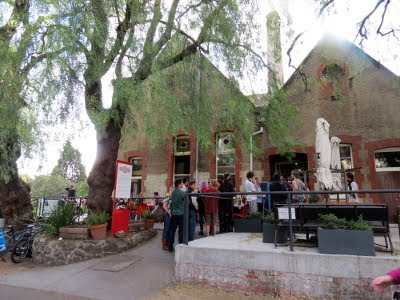 The biggest challenge of our visit proved to be Lentil's popularity! Arriving at around 6:40pm on a Wednesday, Michael grabbed one of the few remaining outside tables while I joined the queue for food. By the time I'd shuffled through the buffet, the line had tripled in length and when we were scheming of seconds it had grown further still, snaking all the way outside and onto the footpath. Instead we decided to surrender our table and sneak a crepe at the cinema.


Though we didn't quite manage to eat our fill, it's heartening to see Lentil As Anything thrive at the relatively isolated Convent.

Reviews of the Abbotsford Lentil As Anything have been mostly positive. Check out veg*n blogs Vegan About Town (twice), Vegematarian, Fat Feminist Foodie and a more mixed account on The Fairest Feed. Posts from omnivores include Dad Down Under, Oh Hey Melbourne, Koala Chronicles, Conversations with Jenny, new international students, Tales of a Technogypsie, We Dare Food, Cookies and Tomatoes, Munching through Melbourne, Discovering Melbourne, The Melbourne Explorer, Ravenous Melbourne, A Girl that loves to Cook, Flagrant Food Fawning and abbotsford blog.


Anh has written about volunteering at Lentil As Anything.

Accessibility: I think entry is relatively flat, although the floor may be uneven. The self-serve buffet was very crowded, as are the tables. (There is some scope to move tables and make space outside.) We donated money on entry at a low-ish table and served ourselves. We didn't visit the toilets.
Posted by Cindy at 8:25 am