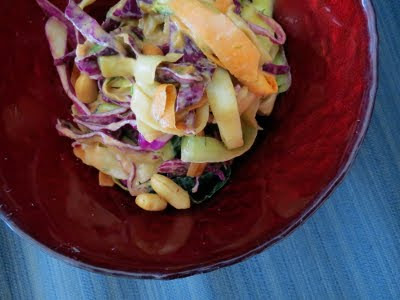 We had four zucchinis in our veggie box last week, and we diligently used them all up before they lost their freshness. And as soon as we got through them, one of Cindy's colleagues gave her the biggest zucchini you've ever seen. So it was back to the drawing board. I was quite taken by the zucchini ribbons that Cindy whipped up a few days earlier, so we went for another recipe that used the same basic approach - vegangela's raw pad thai.


This was more involved, with a fair bit of peeling and slicing to turn the veggies into ribbons. But once you've got them all prepped you're basically done, so it's still something you could put together on a weeknight. We made it even more suitable to the lazy cook by dropping the green onions and sprouts, swapping out real ginger and garlic for pickled and powdered respectively and by just using the peanut butter we had in the cupboard instead of the almond butter. And it was still pretty damn good - fresh and healthy, with lots of crunch and oodles of flavour from the dressing.


This version of the recipe still only used up half of our zucchini, but made ridiculous amounts of food - we were eating it for days. I was impressed with how well it held up - things got a bit soggy but it maintained a surprising freshness even two or three days later, and the longer you left it the more the flavours soaked into the veggies.

Combine all the dressing ingredients in a big bowl and whisk them together.

Throw in the veggies and toss, making sure everything get nicely coated. Let it sit for a while if you've got time, the veggies will soften more and soak up the dressing.

Serve, with the peanuts thrown in at the last minute.
Posted by Michael at 6:33 am