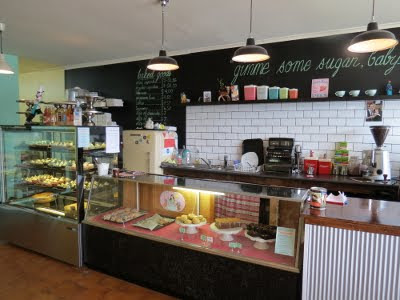 While Reverence had some attractive little cakes on display, we really had to walk a couple shops down and visit Mister Nice Guy's newest outlet. Here they've expanded on their well-known cupcakes with brownies, buns, pies and cakes. It's still all vegan with an impressive proportion of gluten-free items, all well-labelled. 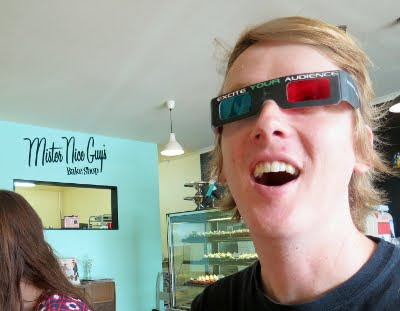 Also impressive is the Day-of-the-Dead styled 3D artwork - fish around the magazines for a pair of glasses to really appreciate it! 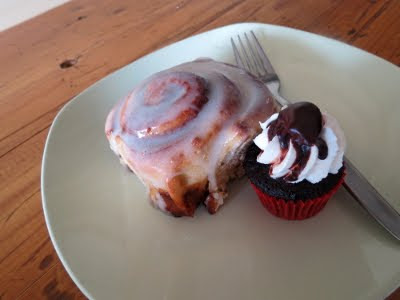 Michael tried out one of Mister Nice Guy's almost famous cinnamon buns ($4.50), while I spared room only for a mini cherry b-bomb ($2). The cheesecake slices are large and fluffy and the gluten-free goods are impressive - I particularly liked the toasty roasted walnut brownie ($4) that Michael and I took home and split later in the day.

With Crumbs located across the street (albeit shut on this day) there's no doubt about it - Union Road, Ascot Vale is Melbourne's new vegan dessert hotspot.


We previously visited and blogged Mister Nice Guy's cupcakes when they were in Brunswick. The Ascot Vale bakeshop's getting very positive blog coverage from new international students, Live Blissful, and the veganopoulous family, who've been one, two, three times and are set for plenty more!
____________


Accessibility: From memory, Mr Nice Guy has a flat entry. There's plenty of space inside and the display cases are clearly visible and well labelled. Ordering and payment happens at the counter. We didn't visit any toilets.
Posted by Cindy at 9:43 pm