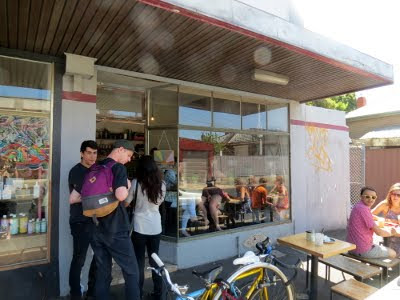 It's been more than a year since we last visited New Day Rising, so having had our 10 minutes of fame on RRR, we ducked around the corner to have a late brekkie. They were the only place trading in the neighbourhood so they were pretty rammed. They're not exactly spacious to begin with and it was pretty incredible that we managed to snag a table (a lot of people were just milling around to grab takeaway coffees). 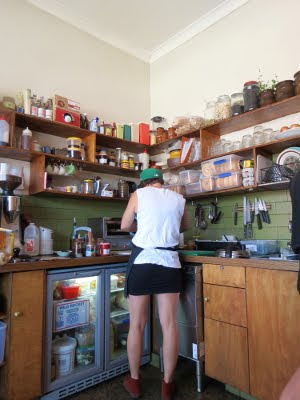 While the cafe itself is as tiny as ever, the menu has expanded a bit since our earlier visit.  The same basic approach to breakfast is on show - it's all vegetarian, very vegan friendly and makes excellent use of bagels. They also have gluten-free bread available for an extra dollar. I was again tempted by the valoumi (not least after reading the touching postcard someone had addressed to it that was stuck to the wall), but eventually settled on the Truckstop (bagel with a fried egg, mayo, rocket, cheddar and home-made bbq sauce, $11). 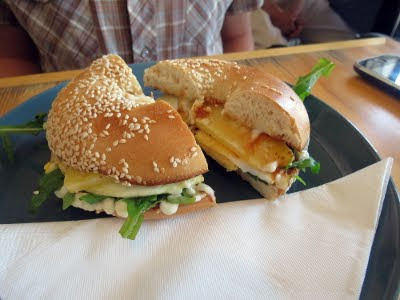 It was scrumptious - thick chunks of cheese, thin fried egg, bbq sauce and mayo oozing everywhere and a few bits of greenery to give the illusion of healthiness. All on a lightly toasted bagel, which was good enough to have me thinking about busting out some home-made bagels again soon.


Cindy somehow passed up the chance to tackle the CLT again, instead going for a simple serve of toast, with chocolate tahini to spread on top. 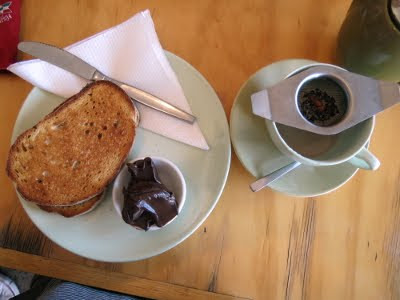 I had a tiny taste, and found the chocolate tahini a pretty excellent combination, but I'm not sure I could have worked my way through two pieces of toast covered in it. Cindy munched on though, and was pretty thrilled to have a chocolatey start to the day.


Despite the crowds, the staff were friendly and helpful, and the coffee was top notch. You're never going to be able to guarantee yourself a table there, but they seem to move people through fairly quickly and the whole vibe is pretty relaxed. It's wonderful to have a vego place doing reasonably priced but wonderful breakfasts nearby, and there are still plenty of dishes on their menu I'm keen to sample. We'll have to head back up again before another year passes.
____________


Read about our first visit to New Day Rising here. Since then, there haven't been too many reviews - Daily Buzz, Tempeh Tantrum, vegan about town and Why I've never been to Adelaide all liked it.
____________

Accessibility: A small step up on entry into a fairly crowded interior. You order at the table and just pay whoever you can grab by the coffee machine. The bathroom is accessed from outside somewhere - we've not checked it out.
Posted by Michael at 8:59 am