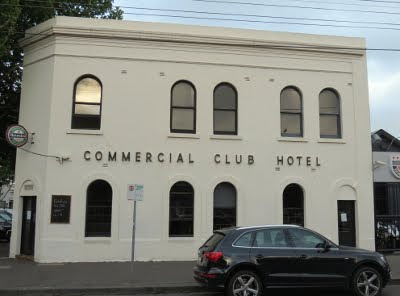 We've had Cindy's brother staying with us over the Christmas break and he's been pretty keen to see how Melbourne's pub meals compare with those back in the country town he calls home. We took him to the most old-school pub we could think of in our neighbourhood - the Commercial Club Hotel on Nicholson Street. I'd had a pleasant (and unblogged) meal there a few months back and thought it would fit the bill. 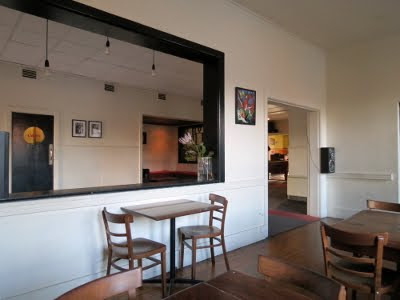 It's a pretty charming pub: a big front bar, a dining room with a few odd nooks and crannies and a lovely-looking courtyard out the back. Melbourne's summer was not at its most ferocious, so we settled indoors and sized up our options. The menu is pretty simple: a handful of pizzas, a veggie burger, a dhal and a pot pie (along with traditional meatier options).

I've become pretty predictable at pubs, always willing to give a veg burger a try (if only to make sure I get a side of chips). At $13, this was a pretty good value version. The mixed veggie patty (bound with egg maybe?) was surprisingly fresh and tasty - a far cry from the defrosted veggie burgers that sometimes places use for the meat-free burger option. It was drenched in mayo, and served with a fairly standard salad (greens, beetroot, tomato, cheese) - cheap, satisfying and incredibly messy to eat. 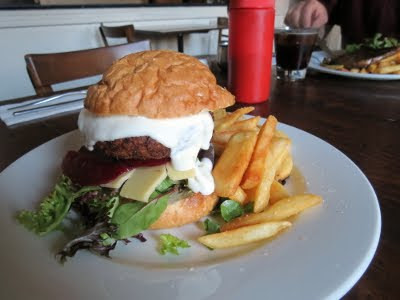 Cindy ordered the lentil and mushroom pot pie, with cheesy mash ($15), only to find out that they were out of its ingredients. Instead, they whipped up a similar dish, but with chickpeas and pumpkin as the main filling ingredients. 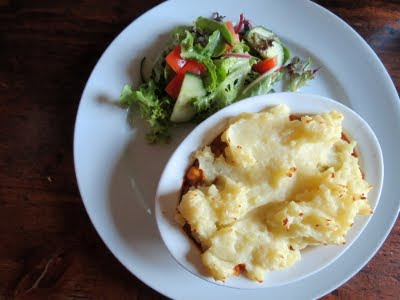 Cindy was a bit disappointed that the pot pie was entirely pastry free, and the mash topping wasn't quite as cheesy as I expected, but the filling was nicely spiced and hearty - a good filling meal for a cool summer's night.


In terms of food alone, The Commercial Club Hotel is probably outmatched by a bunch of other inner-north pubs but it does a nice line in affordable, unpretentious pub-food, served in an uncrowded, friendly venue. It's nice to have it as a lazy local option.
____________


The Commercial Club is surprisingly under-reviewed, with just one positive review from juganaut's foodie thoughts.

Accessibility: The Commercial Club has a small step on entry and is flat and pretty spacious inside. Ordering and payment happens at a high bar. We didn't visit the toilets.
Posted by Michael at 11:21 am