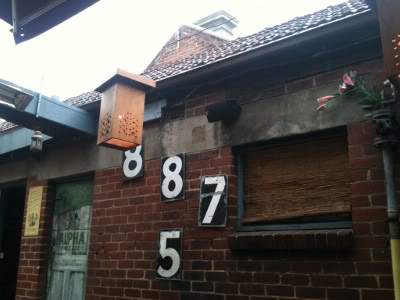 Arriving home after a couple of intense weeks out of town, I had a hankering for a pub meal. It may have been little more than a subconscious desire for chips. Regardless Michael was willing to humour me, so willing to humour me that we even walked - rather than cycled - the length of Alexandra Parade. It was the perfect evening for strolling the streets and sitting in the Fox Hotel's beer garden in a light coat. 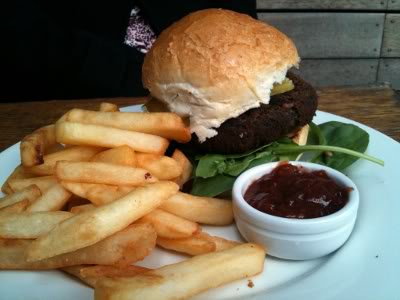 I was in a mushroomy mood and poised to reorder the lasagne until I saw the new veg options on the summer menu. The mushroom, quinoa and pine nut burger with spinach, beetroot relish, caramelised onion, cheese and chips ($17) had all the savoury smoky flavours I was craving. The patty had a tendency to smoosh out the sides of the bun as I worked my way through, but the crispy crust and terrific taste far outweighed this inconvenience. Next time I'll request that they skip the cheese. 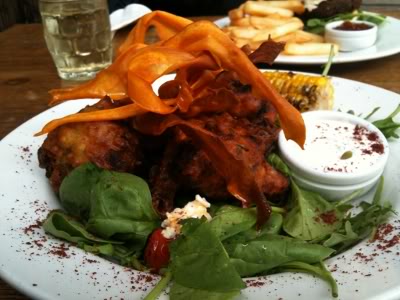 Michael tested the pumpkin and zucchini fritters with smoked cherry tomato, goat's cheese, grilled corn, chilli almonds, rocket and spinach with minted yoghurt ($17). The fritters were puffy and only mildly flavoured but the accompaniments set them off nicely - Michael was particularly taken with the almonds.
It's great that the Fox is still mixing it up with their menu - these new dishes certainly maintain their high standard for vegetarian pub food.
____________
You can read about many of our previous visits to the Fox: one, two, three, four, five. It has since received positive mentions on Parma Daze, Gluten Shmooten and two munch, two mixed reviews on juganaut's foodie thoughts, and a disappointed account on Pram Sandwich.
____________
The Fox Hotel
351 Wellington St, Collingwood
9416 4957
fully licensed
veg entrees $6-17, veg mains $17-18
http://thefoxhotel.com.au/
Accessibility: There's a small step at entry level. Several of the indoor rooms (and probably the ground level outdoor space) have widely spaced tables; the beer garden is up a narrow staircase with rail. All orders are taken and paid for at the high bar. Toilets are at ground level.
Posted by Cindy at 10:55 pm