We'd been a bit ambivalent about Hobart's ever-popular Salamanca Market when we were last in Hobart - too busy and crowded and filled with a lot of stalls selling fairly dull wares. Despite this, Lisa's enthusiasm for Summer Kitchen's veg pies meant that a return trip was booked in as a key priority for our Saturday morning on this trip. Summer Kitchen is right at the bottom of the market, so we fought our way through all the crowds and stalls on our way there. The market wasn't as annoying as I'd remembered - there were lots of great local food stalls and a few other interesting bits and pieces scattered throughout the 'Made In China' t-shirt and sock stalls this time around. Still, I was really only there for the pies. 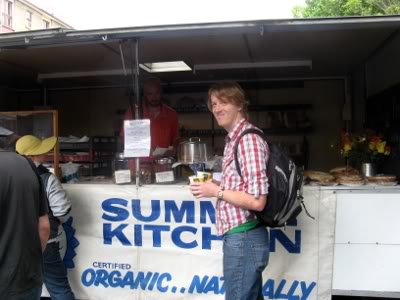 Me, refusing to leave Cindy's photo in case it meant
waiting an extra 5 seconds for pies


There are five veg pies to choose from (two vegan), including chilli bean, curry veg and more, with not a faux-meat in sight. I chose the lentil shepherds pie (lentils, brown rice, celery, tomato, carrot, parsley, potato, onion, garlic, parsley, dairy-free margarine, salt and herbs wrapped in a vegan wholemeal pastry, $6) with homemade tomato relish on top (on the left of the picture below). 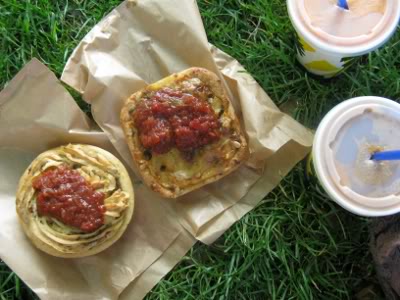 The crispy potato swirl on top tasted fantastic, but didn't really want to stay together with the rest of the pie. Which was fine, because the rest of the pie was wonderful as well - the rich lentil mix and sweet tomato relish were an excellent combo, and the pastry was up there with Funky Pies for flaky vegan goodness.

Cindy ordered the Homity pie (potatoes, leeks, onion, garlic, sour cream, cheese, salt, basil and sunflower kernels in a buttery wholemeal pastry, $6). It's top was less crispy than my potato-based one, being made up of a layer of melted cheese, but just as tasty. The filling was dominated by the potato and leek and whole thing was maybe a smidgen on the dry side from having sat in the pie-warmer a bit long - still, the relish added enough moisture to make up for that.

It's hard to know how good these pies were. Having brekkie at 11:00am tends to make whatever you're eating taste wonderful, and these were no exception - an excellent, cheap and vaguely healthy fast-food option for the hungry and worn-out market-goer.


Darkside of Knitting sampled the other vegan pie on offer at Summer Kitchen and gave it the thumbs up, but nobody else seems to have blogged about them.

Salamanca Markets (Eastern end, Saturday mornings from 8am)
veg pies $6 (they have lots of other baked goods, but we didn't explore any further!)
Accessibility: The market is jammed with people, so it's not amazingly accessible. There's a bit of breathing room once you make your way right down to the bakery, but it's still crowded. Ordering and payment happens at a middling level (see picture).
Posted by Michael at 12:39 pm