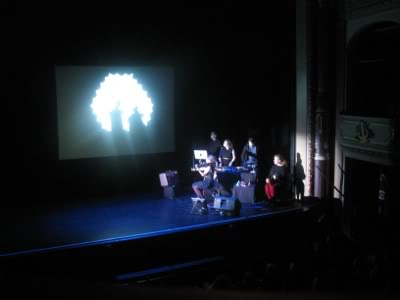 Our afternoon got off to a confusing start. We discovered that MONA was launching its own fancy food market, with more live music and cooking demos to boot, but the transporting ferry was booked out 20 minutes before its departure. As an alternative we looked up the Theatre Royal, where Icelandic band Amiina were providing their own instrumental backing to a series of fairytales, animated by Lotte Reiniger in the 1920s. 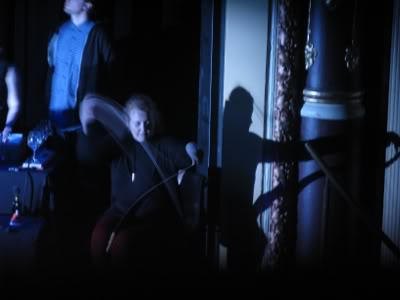 It was a very pleasant diversion and, even better, allowed us time and stomach space to visit one of Hobart's dedicated vegetarian restaurants. 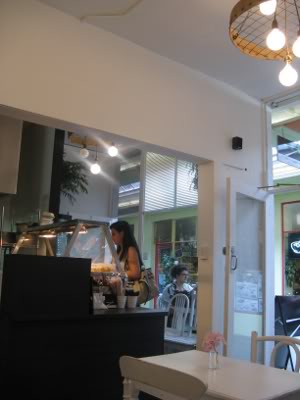 Thai Veggie Hutt is open Monday to Saturday until 3:30pm, so it's really for lunch only. As we stepped in we immediately got a view of the bain-marie with a few noodle and mock meat dishes plus some yum cha-type snacks (these might be a Saturday specialty). Thankfully I held Michael back from ordering for just a minute or two, because there's also more than a dozen soups, rice and noodle dishes that they'll make to order for a few dollars more. We were both attracted to the mock meat but there are plenty of vege-focused mock-less options and they offer gluten-free meals as well. Almost everything is vegan. 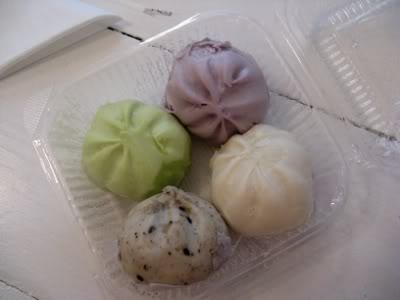 We started out by sharing a box of the steamed buns visible in the bain-marie ($6.50) - they were a bit crunchy on top from sitting around, but plenty hot and still tasty. Each one had a different filling, two of them were sweet and predictably it was the bbq flavoured one we loved best. 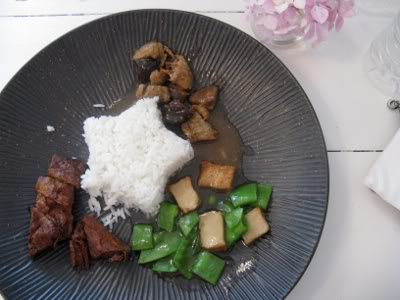 My crispy vegetarian duck with rice ($12) looked beautiful and tasted even better. The sauce was simple and salty and I was thrilled with the variety of morsels in it: super-crispy chunks of 'duck', fresh snow peas, tender tofu, earthy mushrooms and some bonus mock chicken. 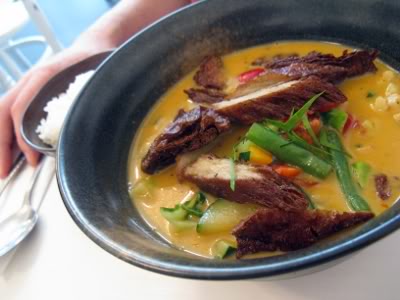 Michael's vegetarian duck curry ($12) arrived a little later and if anything, it was better still! More of those tremendous crispy duck pieces sat atop a huge bowl of fresh vegetables in a spicy kaffiir lime and coconut gravy. I think even Michael was using his rice to neutralise its heat.
It's rare to encounter a restaurant that gets both mock meat and fresh vegetables just right - we reckon Thai Veggie Hutt pulled it off.
____________
Thai Veggie Hutt
Shop 7 Bank Arcade, 68-70 Liverpool St, Hobart
(03) 6231 1270
veg lunches $6.50-12.50
http://thaiveggiehutt.com/


Accessibility: Entry seems flat but it's pretty crowded inside. Ordering and payment happens at a low-ish counter; the bain-marie is a little higher. Toilets are some distance away in the larger shopping complex, and reasonably roomy.
Posted by Cindy at 11:44 am