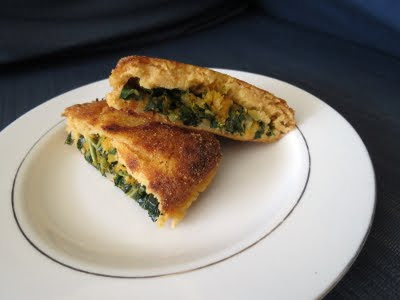 Cindy decided that the Christmas-New Year break this year was a good time for a casual potluck, so she booked in a veg*n bloggers picnic for December 30 in the park near our house. The weather worked out beautifully for us and a solid crowd of peeps turned up with ludicrous amounts of excellent vegan food (I can particularly recommend Danni's pies, of which I ate many).


We had a veggie box pumpkin to use up, and Cindy had bookmarked this recipe that ticked all our dietary requirements (vegan & GF) while using at least some of our pumpkin stockpile. I was a bit apprehensive about taking it on - it looked fiddly and complicated, and I was doubling the recipe and then giving it a few tricky tweaks (onions subbed in for spring onions, a cobbled together 'harissa').  I had visions of a massive failure followed by a trip to the supermarket to buy corn chips or something.


And I have to confess that about halfway through the process, that outcome still seemed pretty likely - my polenta dough wasn't really very pliable, the idea of 'folding' the polenta up over the filling was frankly ludicrous and I was having a rare attack of the crankies in the kitchen. Luckily, as it often does, shallow-frying saved the day. No matter what kind of mess I'd made of these patties in the pre-frying stage, 15 minutes sizzling in some hot oil turned them into delectable discs of goodness. They had a nice crispy shell, coating a softer polenta interior and little bundles of pumpkin and onion goodness.


They're a fair bit of work, and I definitely wouldn't recommend them unless you're cooking to impress. But if you are, then these are worth a shot - the spicy polenta is a particularly inspired touch, but the whole package is pretty classy. It would be immodest of me to repeat some of the compliments they received at the picnic, but suffice to say that our container came home empty. 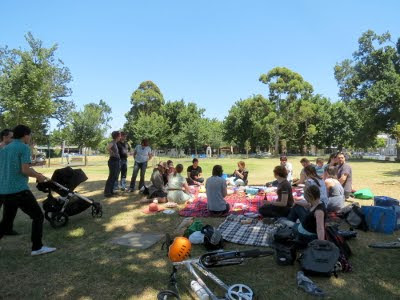 polenta crust
600ml water (plus as much extra water as you need to make your dough pliable - I reckon I used about another 200ml)
400ml soy milk
4 tablespoons of harissa paste (or, if you've none in the house you can make my inauthentic version: 3 tablespoons of sambal olek, 1/2 teaspoon garlic powder, 1/2 teaspoon cumin, 1/2 teaspoon salt, 1 teaspoon of olive oil, stirred together)
3 tablespoons 'chicken' stock
2 cups polenta

extra polenta for dusting, and heaps of oil for shallow-frying

Create your own weird version of harissa paste if you need to.

Combine the 'harissa', soy milk, first batch of water and stock powder in a saucepan and bring it up to a gentle boil. Whisk in the polenta, adding it gradually and ensuring it doesn't get lumpy. Turn the heat down and cook, stirring regularly, for about 7 minutes.

Take the polenta off the heat and leave it to cool until it's at a temperature that you can handle.

In the meantime, work on the filling. Heat the canola oil in a frying pan and then throw the kale in, stir-frying for a few minutes until it wilts. Throw in the onion, garlic and pumpkin, dropping the heat to low. Keep cooking, stirring constantly for a few minutes, until the onion softens a bit and then mash everything together so that the pumpkin is binding the rest.

Stir in the lemon juice and thyme and then take it off the heat.

Once your polenta has cooled, knead it a bit and see how doughy it seems - mine was way too dry at this point, so I stirred through almost another whole cup of water, which made it a bit more malleable. I still wouldn't really call it dough - it stayed a bit crumbly for that - but it was a much more manageable texture.

Grab roughly tennis-ball sized chunks of the polenta and roll into spheres. Pop them on a liberally polenta-dusted surface and smoosh them flat, until they're about 2cm thick discs. Drop about a tablespoon of the filling into the middle and then roughly fold the edges up around it - don't worry too much if the edges don't really 'fold', just make sure that you've covered the filling with polenta on all sides.

Heat a couple of centimetres of oil in a large frying pan and, when it's hot, start shallow-frying. We'd left our patties in the fridge overnight, which probably made them a bit less prone to falling apart, but I don't think it's necessary. Give them a bit of a squish to flatten them as much as you can and then fry for about 8 minutes on each side. You want a nice crispy exterior.

Set them on some paper towel to soak up the excess oil and then serve, halved if you're taking them to a potluck.
Posted by Michael at 9:06 am