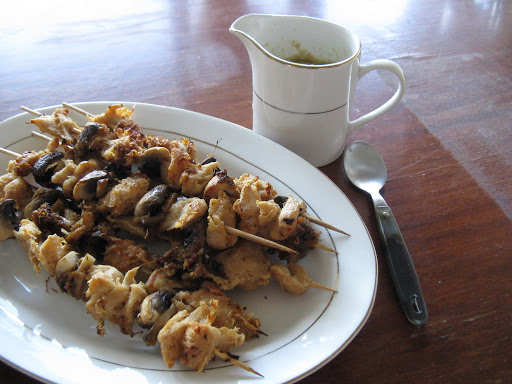 Michael had recently been musing over how long it had been since we'd invited anyone over for dinner, and what fun it can be. It didn't take me long to gather together a gaggle of willing eaters, namely Mike, Jo-Lyn, Marty, Alana and Jos. Michael and I happily spent most of Sunday planning, shopping and prepping, though we were ultimately aiming for a casual meal. Actually, it would be forcibly casual since we don't own enough chairs to seat everyone around the dinner table!
We pulled together a mish-mash of used and new recipes, with a loose (and utterly inauthentic) Thai theme. The 'new' recipes actually come from a 7-year-old cookbook called Step-by-step Thai, a British publication credited to Carol Bowen, Cara Hobday and Sue Ashworth. We plucked it from the pile of books that Krusty and Jason were giving away when they left Melbourne for Colchester, England. It's not strictly vegetarian but there are plenty of meat-free recipes within the book.
We started off with its recipe for satay sticks (pictured above). Though the book uses eggplant and mushroom chunks, we tried a combination of faux chicken and mushrooms with great success. The skewers are marinated in a potent mix of spices, including ginger and lemongrass, and then served with an equally fragrant peanut sauce. Though the marinade is strong, a couple of us couldn't help picking the stray fragments of it from the tray - it was very addictive. 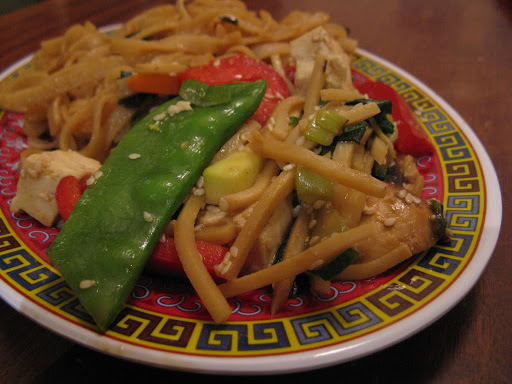 Michael was adamant that the main meal should feature noodles with basil, so we went on a hunt for a less rich vegetable dish to accompany it. Many of the ones in Step-by-step Thai were full of coconut milk, but there was a side dish of cucumber and bamboo shoots that we expanded to many more vegetables and a smattering of tofu. It wasn't all that remarkable but it filled the role we required - it was quick and easy to toss enough for seven people through the wok. 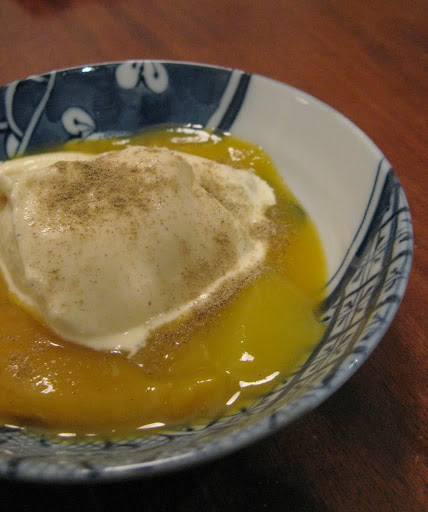 As always, I took on dessert. Though there are some lovely fruit and rice-based desserts in Step-by-step I had my heart set on ice cream, the more Indian white chocolate kulfi to be precise. Once again I had problems setting it, but teamed with canned mango and a sprinkle of cardamom it was still a pleasurable end to the meal.

Our offerings were happily more hit than miss and more importantly, so was the conversation. There's nothing like abundant beer and a room full of university types to get some fierce (but friendly) debate going.

Soak the skewers in water for at least 5 minutes, to prevent them from burning later. Thread the "chicken" and mushrooms alternately onto the skewers, then layer them in a baking dish.
Next up, grind the marinade. Bash together the cumin and coriander seeds, ginger, garlic and lemongrass in a mortar and pestle. Then transfer them to a hot wok or frypan and cook, stirring, until fragrant. Take the spices off the heat and stir in the soy sauce, oil and lemon juice. Spoon the marinade over the skewers and leave them to soak up the flavour for 2-8 hours.
Then prepare the peanut sauce. Put the cumin and coriander seeds and garlic into the food processor and give them a good smashing. Add the onion and process a little more, then add the lemon juice, salt, chilli, coconut milk and peanut butter and process again. Scoop the mixture into a saucepan and stir through the water. Bring the sauce to the boil and then simmer it until you get a texture you like.
Bake the skewers at 200 degrees C for 10-15 minutes, turning once. Serve them with the peanut sauce on the side, ready to pour.

Make sure all of your veges are chopped and ready to go. Whisk together the sherry, soy sauce and cornflour.
Heat the sesame oil in a wok and add the shallots and garlic, stir-frying for about 2 minutes. Add the bamboo shoots and cook for a further minute. Add the mixed vegetables and stir-fry for a couple of minutes, until they're all heated through but still crisp. Pour over the sherry dressing and give it all another minute or two on the heat. Sprinkle over the sesame seeds and serve.
Posted by Cindy at 4:32 pm