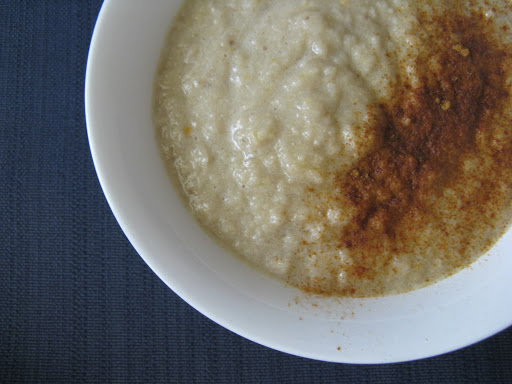 This month's World In Your Kitchen recipe was one I had to take on by myself - banana soup from Malawi. There was no way that Michael was going near banana anything! Unperturbed, I cooked up a half-quantity for my Sunday breakfast and was pleasantly surprised. It's thick and nourishing, though not as heavy as porridge. Though it's unmistakably banana, the orange peel adds something special. Regularly dirtying up the food processor for breakfast doesn't exactly appeal to me but I can see myself making this again.

Use a food processor to thoroughly blend the bananas, then gradually add the milk (reserving 2 tablespoons for later) to form a thick liquid.
Pour the banana mixture into a saucepan. Add sugar and salt to taste, then stir through the orange peel and juice. Bring the soup to the boil, then turn down the heat and simmer for 5 minutes.
In a cup, dissolve the cornflour in the remaining 2 tablespoons of milk, then stir the mix through the soup. Serve the soup hot or cold, sprinkled with cinnamon.
Posted by Cindy at 12:32 pm