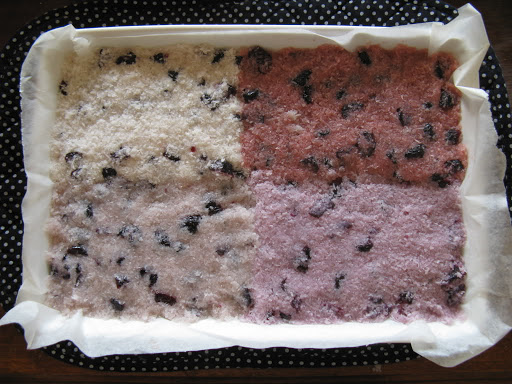 You know the Simpsons episode where Lisa becomes vegetarian and Homer starts a catchy conga line with the chant "You don't win friends with salad!"? Totally not true. On this Sunday, Michael and I made a whole bunch of new friends over the most impressive array of salads I've ever seen or eaten. We'd been invited to a vegan potluck, where we met many of Melbourne's vegan bloggers (Lisa, Kristy & Toby, Buttons, Miss T & Philippa) for the first time and many other cool peeps besides (including Emily from Aduki)! For more thorough write-ups of the event, check out these posts by Lisa, Kristy, Miss T and Philippa. Non-salad food highlights for me were Miss T's white bean pesto & asparagus tart and Kristy's ice-cream sandwiches. After my own recent foray into ice cream sandwiches, I'd like to think it was a case of great minds thinking alike, but my mind had never conceived the wonder that is peanut butter caramel! Wow.
Predictably enough, I hoped to charm the crowds with sweets. In particular, I embarked upon my second round of cherry slice experiments. Having identified the dried royal cherry as my favourite manifestation of the fruit, I went about soaking it in different liquids, hoping to find something that would allow the cherries to meld better with that white, crumbly coconut. In addition, I utterly confounded my experiment by topping the slice with a different kind of chocolate to my previous experiment. (Bad scientist. Bad bad scientist.) The Lindt 70% of slices past is short on sweetness, and I replaced it with Tropical Source choc chips to great effect. Let's hope it didn't interact with those soaking liquids! Here are the candidates... 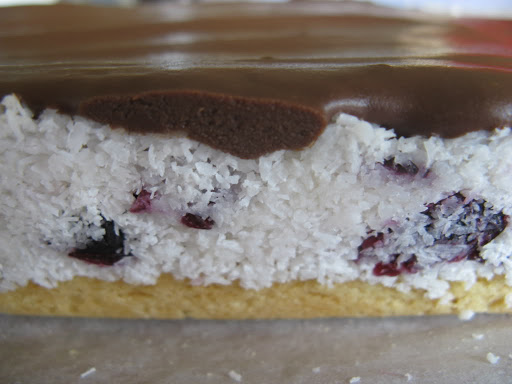 1 Plain. As I previously noted, this version is tasty but doesn't provide a great meld - the coconut barely takes on any cherry colour and is quite crumbly. 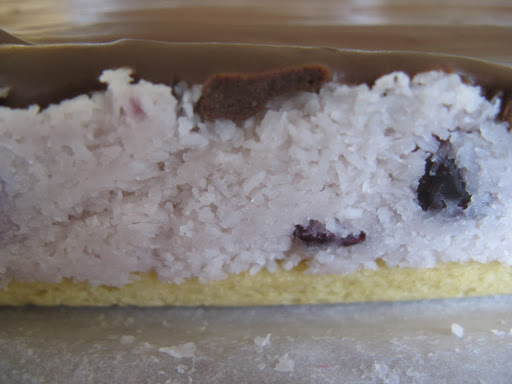 2 Sugar syrup. Even after an hour of soaking, this syrup took on only the barest hint of cherry colour. It did provide some nice extra binding and a shot of extra sweetness. 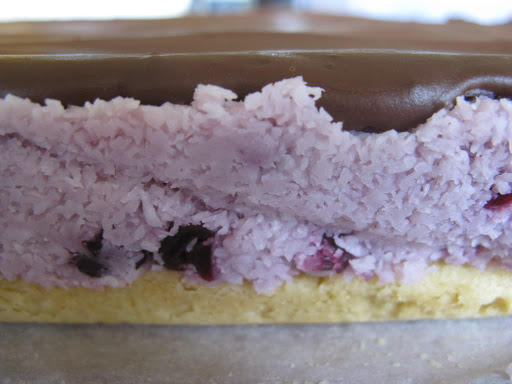 3 Apple juice. The juice quickly acquired a distinct pink tinge, providing a little extra binding for the coconut, though not as much as the sugar syrup. 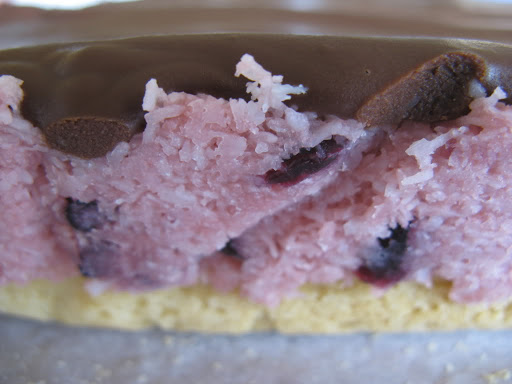 4 Black cherry syrup. I bought a Saba brand cordial from Medditeranean Wholesalers and it may well have transferred more colour and flavour to the dried fruit than the other way around! There was a hint of the ol' cough syrup about it, but it really worked for me - such vibrant colour and flavour compared to the other versions. It provides excellent binding power for the coconut, too.
I think we have a winner! Though, you know, the crust really is a bit crumbly, especially when I try to slice it up small. I can see a third suite of hypotheses forming in my mind already...
Posted by Cindy at 12:31 pm