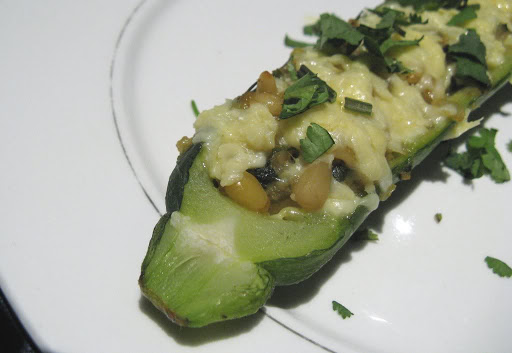 After the stunning success of August's World In Your Kitchen recipe, we somehow let all of September slip by without getting around to the recipe of the month. We were too busy making the noodles again and again I guess. Even though Cindy was heading out for dinner on Saturday night, I figured it was time to turn the calendar page, so I decided to tackle stuffed zucchinis alone.

Like all the recipes in the calendar, this was pretty easy to prepare - I may have slightly overboiled the zucchinis, so my little zuch-boats were a bit floppy, and shed some filling in the oven. The filling itself was a bit on the bland side - I probably should have upped the chilli to give it a bit of zing. Instead I compensated by really slathering on the cheese, which meant that it all turned out tasty, but pretty oily. A little disappointing really. I think the version that Cindy invented last summer was better.

Preheat the oven to 200 degrees.

Boil the sliced zucchinis for about 5 minutes or so - you want them to soften, but not to turn too mushy. Once they're done, scoop them out of the pot and rinse them under cold water. When you can handle them without burning yourself, scoop the middle of the zucchini out and chop it finely.

While the zucchini is boiling, heat the oil in a frying pan and fry the onion for five minutes or so. Add the garlic and the pine nuts and stir through. After another minute throw in the cumin and half of the parsley.

Add the chopped zucchini pulp to the frying pan and cook for 10 minutes, stirring often.

Once the filling is cooked, scoop it back into the zucchini shells (which should already be sitting on a baking tray) and bake for 5-10 minutes.
Posted by Michael at 4:31 pm