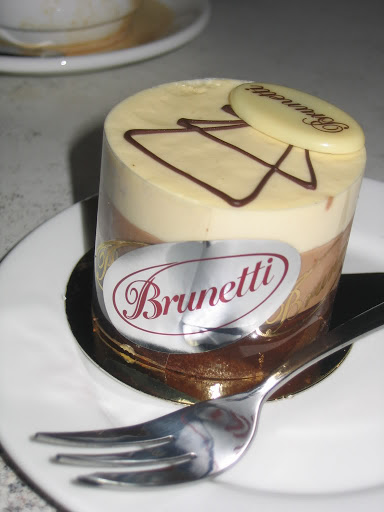 As I hinted in my previous post, I've been spending the weekend with a long-time friend, L. Her journey from Brisbane was made for entirely unselfish reasons - to introduce her internationally-acquired partner S to another Aussie city and to pull her sister L2 away from a demanding day job for a bit of fun. The trio managed to pack in a formidable five days of shopping, sight-seeing, eating and catching up with friends, with a day-and-a-half of it based at our home. On their Friday night arrival at our place, I decided to team a welcoming home-cooked dinner with a very Melbourne dessert out on Lygon St.


One of my favourite moments of the weekend was presenting the very vego-skeptical S with a plate of enjoyable meat-free food. Aware that he'd taken a shine to Australia's meat pie, I prepared a muffin pan's worth of TVP mince pies, fragrant with a rosemary gravy. On the side were lemony potatoes with artichokes (I'll make these again and blog them soon) and a handful of baby spinach leaves. Though there was plenty to talk about and fill each other in on, I didn't miss the look of wonder on S's face after his first couple of bites or his keen acceptance of seconds.


An hour or so later it was on with the coats and out onto Lygon St. The expansive and varied dessert selection at Brunetti has consistently impressed our visitors to Melbourne, and L comes in as second most excited ever (Emma wins by a whisker). Michael bravely claimed a table outside for us to squish around, and this mild discomfort was far outweighed by the cakes in front of us and watching the careful art with which L demolished this chocolate-topped tart: 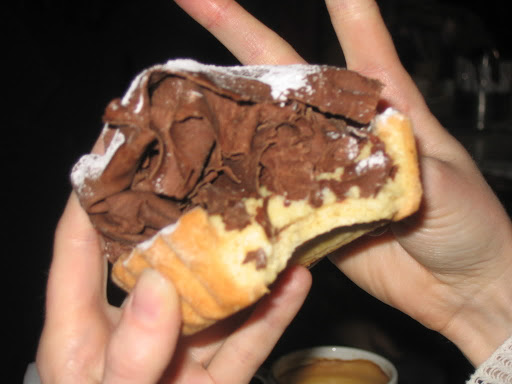 I picked a winter pudding for Michael and he reported that I did well to match his tastes. It was a warm little rendition of the bread-and-butter-pudding, a concoction with custard, cherries and chocolate. For myself it was the triple chocolate mousse (pictured at the top of the post): I'm still not really sure how it's supposed to be eaten politely, with the plastic wall seeming impossible to remove. Perhaps I'm meant to genteel-ly leave those last smears of mousse on the plastic? (No chance!) Top to bottom, this mousse is a study in light to dense chocolate, beginning with a creamy white version and ending with a firmer dark mousse and thin chocolate biscuit layer. Its modest size proved to be more than enough to satisfy my choc-o-meter. 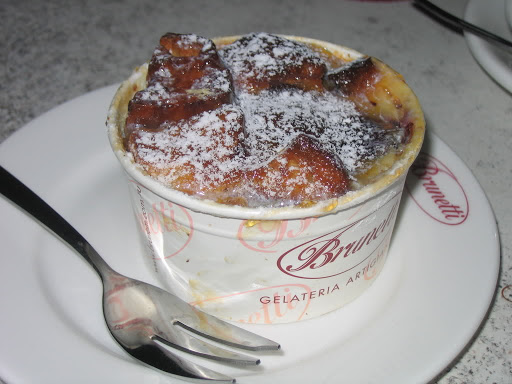 (You can also read about our other visits to Brunetti: one, two, three, four, five and six!)
Posted by Cindy at 1:30 pm