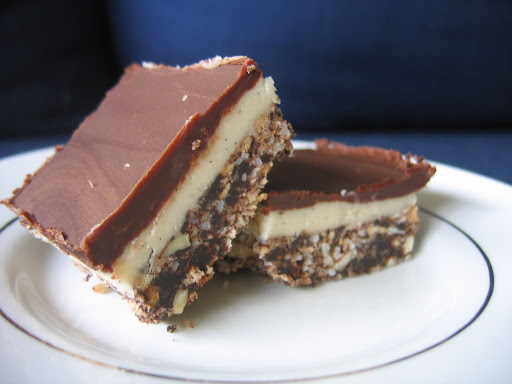 This week Beth celebrated her birthday with a banquet at the Moroccan Soup Bar and about twenty well-wishers. Michael and I thoroughly enjoyed a night spent catching up with a few friends and meeting lots of new people along the way. Amongst the conversation was a verbal recipe from a Turkish fellow for the legendary yoghurt chickpea dish that's always finished first at the Moroccan Soup Bar. I madly scribbled down notes and will begin experimenting at home shortly!
But before all the meeting, greeting and eating, I made a batch of Nanaimo bars as a gift for Beth. I first encountered Nanaimo bars when a Canadian student baked them for a lab morning tea while I was at the University of Queensland. They're a triple-layer no-bake slice with a biscuit-y base, sweet vanilla filling and chocolate top, claimed by the city of Nanaimo, BC. Hers were super-sweet, a little gooey in the middle and luckily, plentiful - there were enough for me to take a second one, and (3-4 years later) I still remember that the person sitting next to me ate four or five! Surely a treat worth researching and recreating, right?
My main sources were the "official" recipe and, because I prefer vanilla extract to using custard powder, this vegan version. The base was a bit heavy on the coconut and crumbly, so I'd adjust the coconut and butter proportions if I made this again. Also, I relied on ordinary dark cooking chocolate for the top layer: it tastes fine but the overall effect is incredibly sweet. A more bittersweet chocolate (such as Lindt 70%) would probably make a better contrast to the sugary vanilla icing. It'll be quite a while before I pull out this recipe for another sugar rush, but Nanaimo bars make an attractive and relatively easy-to-prepare dessert.
Nanaimo bars Gently melt the butter, sugar and cocoa in a saucepan. Add the egg and stir well, then take the mixture off the heat. Stir in the biscuit crumbs, almonds and coconut. Press the mixture firmly into a baking tray. Refrigerate while you prepare the next layer. 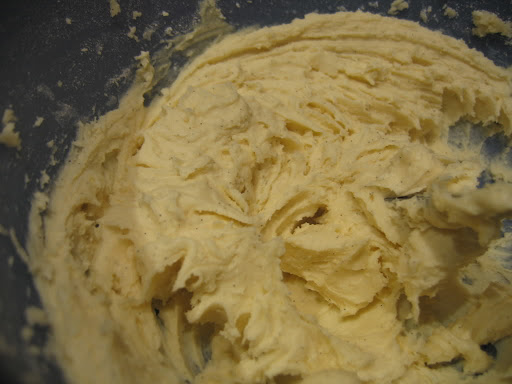 Beat the butter and vanilla until smooth, then gradually add the icing sugar. Pour in the milk, a tablespoon at a time, if the mixture becomes too stiff. Keep beating until the buttercream is fluffy. Spread it gently onto the bottom layer: 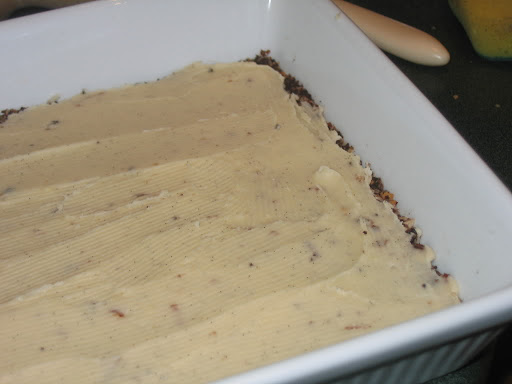 I found that some of the coconut and biscuit bits lifted and got caught in the cream but it turned out OK in the end. Return the tray to the fridge while you prepare the final layer. 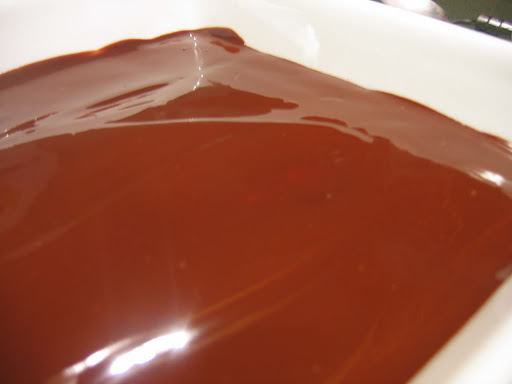 Gently melt the chocolate and butter over low heat and allow it to cool slightly. Pour it over the slice and gently smooth it out into a glossy covering. Refrigerate to set and carefully cut into squares to serve.
Posted by Cindy at 12:09 pm