This dinner was very much inspired by Johanna's tortilla casserole over at Green Gourmet Giraffe. I liked the idea of tortillas baked and softened by a tomato-sauced, spicy beans and a crunchy, cheesy top. Even better, I had another packet of organic corn tortillas in the cupboard to trial it with. From that point, though, I just went with my intuition and the available ingredients rather than religiously following Johanna's recipe. My relatively neat circular tortilla layers were a successful alternative to Johanna's rip-'em-up approach but I didn't include enough canned tomatoes, rendering a moist but not saucy filling. This created a further misfortune: the chopped chipotle chilli spread its heat unevenly through the mix, supplying bland and fiery mouthfuls intermittently. These minor mishaps are easily addressed and I've noted below my intended changes for next time - I think this concept definitely deserves a second run. This dinner, however, was saved by a particularly good avocado, served on the side with a handful of salad greens. 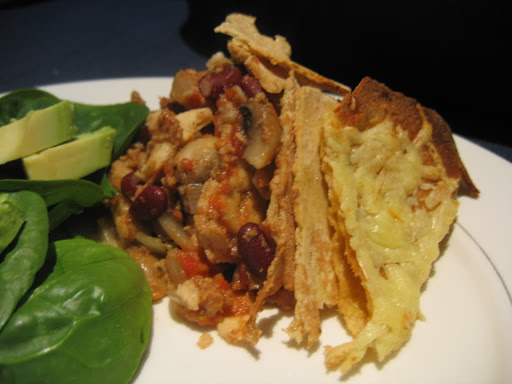 Preheat the oven to 200 degrees C. Rehydrate the TVP with an equal volume of hot water.
Heat the oil in a large saucepan and fry the onion until softened. Add the garlic and cook, stirring, for another minute. Next add the mushrooms, stirring to cook evenly. After a couple more minutes, add the capsicum, beans, tomatoes and chilli/spice. Simmer for 10 minutes.

Pour just enough of the bean filling into a casserole dish to cover the bottom. Fit a tortilla or two over the top, ripping them up to form a single layer that completely covers the dish. Alternate layers of filling and tortilla, finishing with a double layer of tortillas. Sprinkle over the grated cheese and bake, uncovered, until the cheese is melted and beginning to brown.
Posted by Cindy at 6:26 pm