Cindy and friends previously discovered Nila Junction in Brunswick and their experience was positive enough that, once our first plan of Los Amates fell through, we were keen to drag our interstate visitors into the city incarnation, Nila City. It helped that we'd just stumbled out of Hell's Kitchen bar a few doors down when we found out Los Amates didn't have room for us.

The menu is bursting with cheap Indian options. Insanely cheap. Entrees from $1.95, meals from $3.95 - it's like we'd stumbled into an Indian city. Or maybe the 1970s. Of course, I assumed that cheapness meant small meals and opted for the most expensive vego option on the menu: the vegetarian meal. It's basically a giant thali (although some would say all thalis are giant), with six different curries, a roti and a truckload of rice. The curries were all serviceable without being particularly memorable, but they were warm and spicy, and flavoured up delicious bread and well-cooked rice. It's hard to imagine another place where $10 can buy you this much good food. 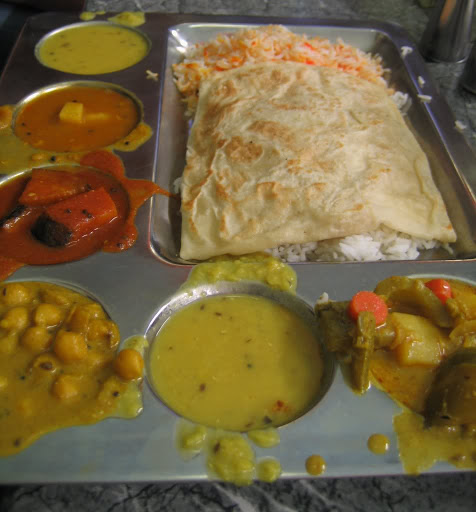 Cindy also thought that she could handle more than just one meal. She kicked off with a potato bonda - masala mashed potato balls dipped in chickpea flour and deep-fried. Again, the assumption was that for $2, this would essentially be a bite-sized entree. Of course it wasn't - it was a substantial fried spud ball, served up with a tomato sauce. The potato was almost too spicy for Cindy's tastes.

She followed it up with a mini roti curry roll (before you even think it - the 'mini' in the title didn't reflect reality). Unfortunately, despite the menu's promise of a chickpea curry filling, the bulk of the roll's insides were stuffed with a potato masala very similar to the bonda. Still, the bready roll was tremendous (so much so Cindy ended up picking her way around the filling) and the bits of chickpea curry that were inside were great. No great loss at $3.95. 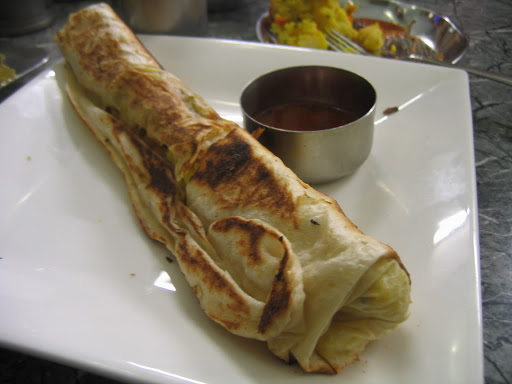 Our fellow diners were reasonably satisfied with their meat-based dishes and everyone walked away very happy with the impact on their wallets. So it seems that Nila City performs the same role as Nila Junction - reasonably tasty Indian that is bafflingly inexpensive. In fact, I think we'd save money if we just stopped cooking dinner and ate at Nila every night. Perhaps we'll give it a try.

Again, Michael uses the wrong log-in for his review.
Posted by Cindy at 9:01 pm