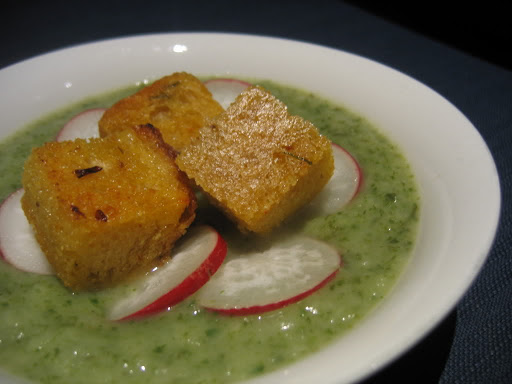 We needed a better excuse for our trip to Preston Markets than just the nearby bakery, so before we set off we dug up this fennel leek soup recipe from our Moosewood cookbook for Sunday night's dinner. It was loaded up heavily with vegetables and seemed like it would be a decent winter's dinner. The recipe took a bit longer than I anticipated - you basically end up making your own stock for the base of the soup - and the final product was a little short on flavour (at least partly due to my forgetting to put pepper in), but still heavy, warming and satisfying. The thin-sliced radishes were a fine accompaniment, as were the croutons that Cindy made up from the fresh bread we'd picked up at the markets, but the whole package was just slightly short of flavour. It's something to work on - maybe up the leek content for next time.

Trim off the odds and ends from the leeks and fennel bulb and rinse them (the odds and ends I mean) thoroughly. Keep the good bits aside for later. Place the odds and ends in a large pot along with the carrots, half the potatoes, the thyme, fennel seeds and some salt. Cover with the water and boil for 45 minutes or an hour to make stock.

While the stock is simmering, slice the fennel bulb thinly and chop the white parts of the leeks up. Heat the olive oil in a pan and saute the fennel and leek for about 15 minutes, until they're soft.

Strain the stock and then put the stock, the fennel and leek and the remaining potatoes back into the big pot and simmer it all for about 15 minutes. Stir in the spinach, dill, lemon juice and the rest of the salt (and the pepper!).

Puree the soup in batches in a food processor until smooth. Serve it up with a handful of radish slices and a few croutons floating on top.
Posted by Michael at 6:13 pm