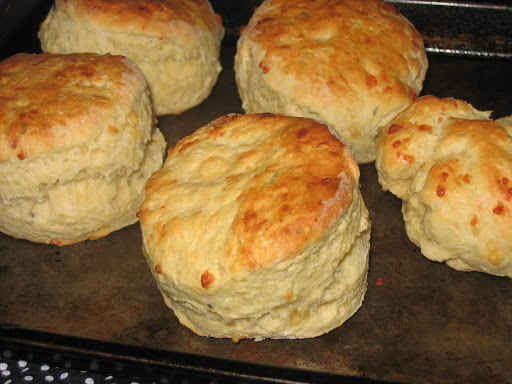 Although my paternal grandmother consistently baked fantastic pumpkin-sultana scones when I was growing up, the sweet scone has never really been a favourite of mine. Instead it's one vaguely-remembered instance of cheese scones, baked by my maternal grandmother for lunch, that haunts me. Earlier this winter I was reminded of them, for no apparent reason, and I've been longing for them ever since. When an appropriate weekend lunch at home didn't arise I took matters into my own hands and booked them in for dinner. I suspected that Michael wouldn't approve of scones for dinner so I prepared them on a Tuesday night - on Tuesdays Michael comes home late and I do the shopping and cooking unsupervised. To make the scones more dinner-appropriate I thought I'd team them with soup.
This recipe comes not from my grandmother - rather, it's a combination of "Lily's Scones" from Nigella Lawson's How To Be A Domestic Goddess, Angie's rosemary and cheese scones (themselves inspired by Lily's Scones) and a few personal tweaks of convenience. I'm not the most adept at combining, kneading and rolling in the brief and gentle way that yields a light, fluffy scone. Even so, an oven-warm (or lightly microwaved) specimen spread with butter has been a wonderful thing. These scones would indeed be a lovely companion to a bowl of tomato soup, if I hadn't relied on the canned variety on this time-poor weeknight. So it was a meal that offered some contentment for the present, and anticipation of some much better future dinners when my scone-kneading and soup-making skills have improved.
Parmesan and rosemary scones

500g plain flour
1 teaspoon salt
~5-6 teaspoons baking powder (not very precise, I know, but I was finishing off a jar)
75g cold butter, diced
75g parmesan cheese, grated
2 teaspoons fresh rosemary, finely chopped (this is fairly subtle, you could increase it up to a tablespoon if you love rosemary)
300mL milk
extra milk

Preheat the oven to 220 degrees C and grease a baking tray.
Sift the flour, salt and baking powder into a large bowl. Rub in the butter until it's evenly distributed. (Damn, I hate this step. Might cheat and try the food processor next time.) Stir in the grated cheese and rosemary. Add the milk and stir only until just combined to form a dough.
Lightly flour a work surface and briefly knead the dough. Roll it out to 3cm thick. Dip a round cutter (I use a drinking glass) in flour and cut out scones, placing them on the baking tray. Re-roll the last scraps of dough to make a couple more. You should have about a dozen scones, although I had about 7 monster-scones instead. Brush the tops of the scones with milk and bake for about 10 minutes, or they rise and turn golden.
Posted by Cindy at 8:48 am

Labels: How to be a Domestic Goddess, Internet-Sourced Recipe, Nigella Lawson