A brief work trip to Brisbane gave me a great opportunity to take a quick run through the vego scene there. It's booming, with two new veg-only lunch places popping up in the CBD since I'd last visited. First up, VegeRama (1/300 Queen Street, weekday lunches only). It's basically a vegie hot box place, with a wide selection of curries, stir-fries and other treats to choose from. I couldn't go past the burger (which was vegan) - a marinated tofu pattie, with a satay/hummus sauce, grated carrot and beetroot, and other salady bits and pieces on a wholemeal bun ($8 ). It's pretty tasty, but maybe a little pricey for what is really a very simple sandwich. Still, the remaining options at VegeRama looked worthy of investigation, and it's fantastic to see a veg place sitting in a food court amongst all the other horrors. 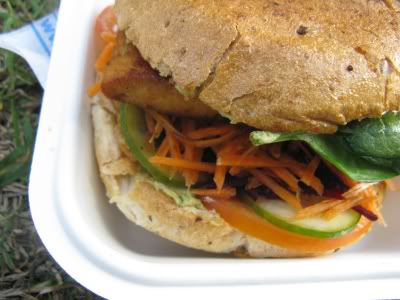 The second new place in town is the Sanitarium Kitchen (145 Eagle Street), run by the folks who produce all of this stuff. Given the amount of faux meat they churn out, I was expecting a cafe that was high on sausage and bacon-based dishes, but Sanitarium are shooting for something with broader appeal: sandwiches, pastas, curries and tagines, along with their signature dish (and my lunch order), Spanish bean quesadilla ($12). 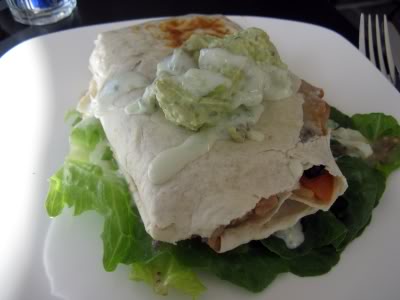 Inevitably this was a little disappointing - my lunch-time Mexican standards have been raised too high by Trippytaco. The filling was a little on the bland side and, while the sauces were nice enough, a bit of zing was missing. Perhaps I should have ordered something else - Sanitarium was overrun when I visited, with almost all the tables full and a queue of takeaway customers snaking out the door. It's worth noting that the menu doesn't provide any help for vegans, and from all reports Sanitarium aren't trying particularly hard to cater for a vegan audience, which seems like a pretty poor oversight to me.

With the new boys out of the way, it was time to return to some old favourites. Kuan Yin (198 Wickham St, Fortitude Valley) is possibly the best value mock-meat restaurant in Australia. For $10, I got this: 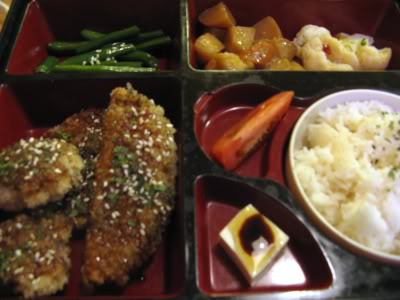 The 'combo' ('fish', 'chicken' and 'pork' I think), comes in one of their cute bento boxes, with all kinds of delicious sides. Throw in a lychee bubble tea, and you've got a delicious and affordable treat. Their hours are a bit weird - I think they close at 8pm most nights - but no trip to Brisbane is complete without a quick visit. 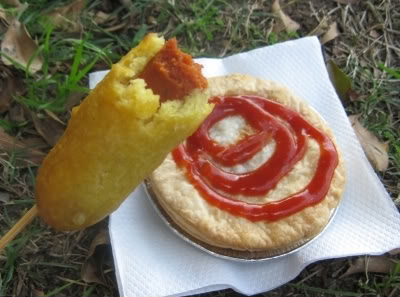 For $7 I wandered off with a dagwood dog and a no bull pie (both vegan). The pies are fantastic - only bettered by the homemade version (I'd rate them slightly above La Panella), and the dagwood dog was pretty great as well (let's face it, I was just excited to be eating a vegie dagwood dog). The markets themselves have changed since we used to live nearby - lots more stalls in seemingly less space = a very crowded morning.

Finally, it was time for a visit to an old favourite: Govinda's (99 Elizabeth Street). It's Krishna food, but it's Krishna food done well and done cheaply (between $6 and $10 all you can eat). 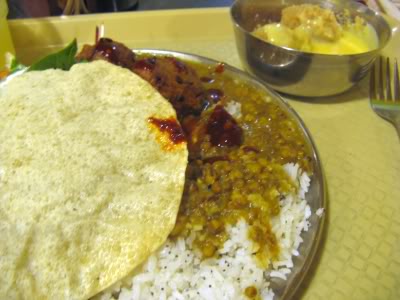 Throw in a run of four straight sunny days with temperatures in the mid-twenties, and it's enough to make you think about moving back...
Posted by Michael at 8:00 am