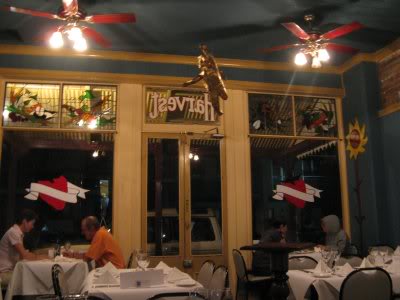 A mere five days after returning home from Conti House, Michael and I were at it again - this time jetting to Sydney to hang out with numerous friends we originally made in Brisbane. Phase One involved a ferry to Balmain to check out Jack and Emma's new lodgings. They've been calling Sydney home for just three months and when they spied a highly recommended local vegetarian restaurant in their Sydney Eats guide, they were kind enough to hold off visiting until we were present to join them.
Apparently Harvest has been around a long time - yourRestaurants gives it 36 years, though I thought I read only 16 elsewhere. Regardless, it's a well-established nook intended for a slightly special night out - it's white tablecloths, soft lighting and $20 mains, though the chalky vegetable drawings on the walls are more homely. The menu is expansive - in addition to six entrees and seven mains, there's a Chef's Special page with a further four entrees and four mains. Vegans are well catered for - the vegan and vegan-adaptable items are well-marked and constitute 40% of the entrees and 45% of the mains - but the remaining items show a penchant for cream-based sauces and cheese. We were all overwhelmed by the array of tantalising options and came up with a plan that pleased me no end - we'd share four entrees equally and share tastes of our mains. Entree #1 is Three Mushroom Ravioli ($12.50). The menu assures us that these pasta shells are stuffed with porcini, Roman and field mushrooms but I just tasted warm, comforting savoury mush. We chose the intriguing orange and basil sauce over the grain mustard and cream alternative. They really pulled it off; though it looked almost like a sugary Chinese takeaway condiment the flavour was subtler, less sweet. The basil set it off perfectly. 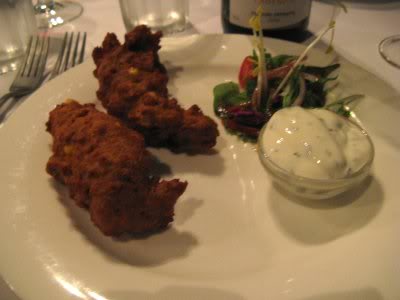 The Indian pakoras ($10.90) were sizable but a little bland. However they were saved by the accompanying yoghurt and mint dressing - possibly the best one I've ever tasted. 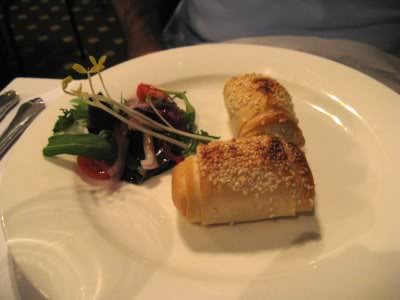 Feta parcels ($11.95) may not sound particularly imaginative but when they're this well executed, it doesn't matter. Fresh out of the oven, they had the balance of flaky outer and creamy inner just right. 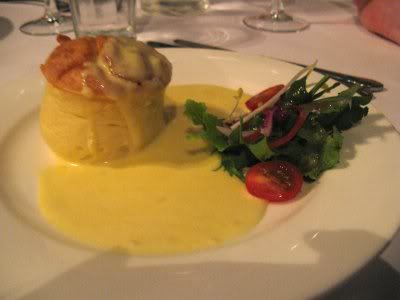 The twice baked goats cheese souffle ($13.95) came from the Chef's Special list and it sure was special. The texture was perfectly cloud-like, the flavour not too eggy, and the lemon myrtle sauce was stunning. The overall effect was very rich and I was content to savour my quarter share and pass on the remainder. 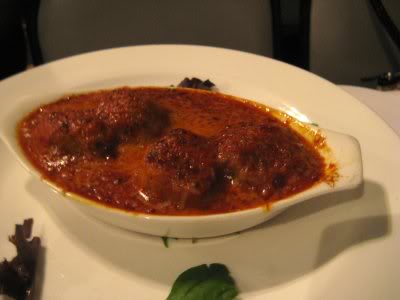 For their main courses, Emma and Michael chose the English spinach and kumara gnocchi ($20.50) in its two guises. Emma's were baked in a tomato and sage sauce (above), a decidedly less rich dish than Michael's lemon and garlic cream (below). Thankfully we were handed a large bowl of salad to share around the table and cut through the fat. 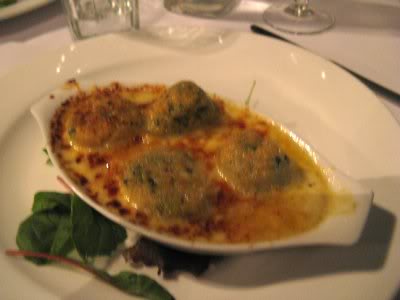 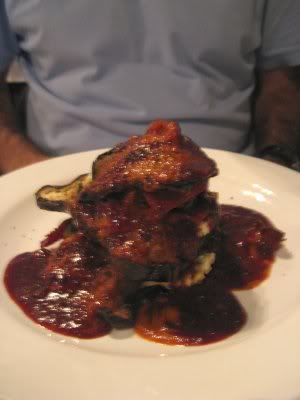 Jack had the coveted Harvest Meditteranean Augbergine Tower ($21). In addition to the obvious eggplant, this was layered with goats cheese, roasted red capsicum, sweet potato, English spinach, tomato, basil and a plum and tomato glaze. Michael enviously declared this his favourite main of the night. 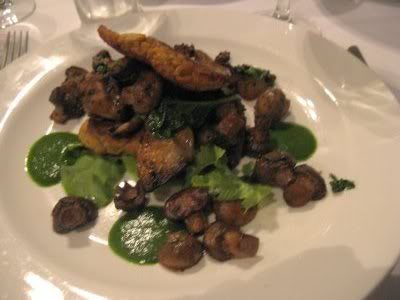 I had a go at the savoury mushroom pancake stack with an English spinach sauce ($21.50). In stark contrast to the other mains, the sauce was sparing - some would probably find this dish too dry but I was quite content. The sauteed mushrooms and potatoes had the most incredible deep flavour, and the pancakes were firm and crusty like fritters. 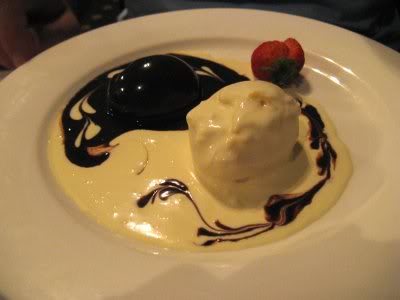 That wily waiter of ours slipped dessert menus under our noses before we'd even decided if we could fit it in. Once we'd seen the eight options (only one vegan!), of course, we couldn't help but negotiate two or three to share amongst us. There was a bit of a misunderstanding that meant they didn't prepare an apple, berry and nut crumble for Emma, but she and Jackson had enough on their plate with these two seemingly trifling truffles ($10.90). You can probably tell how creamy and rich they are but that's not the whole story. That dark chocolate one up the back? It was some kind of black hole of cocoa, sucking any other flavour into its event horizon. Even the fairly fierce red wine we were drinking was completely defeated by it! I don't think those two even managed to finish the plate. 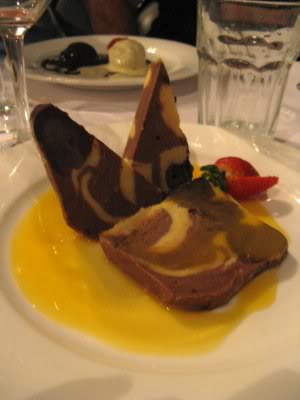 Michael was generous enough to let me choose for the both of us - the three chocolate terrine with a citrus sauce ($10.90). The texture is amazingly smooth and buttery; like a mousse but denser, like a ganache but firmer, like ice-cream but less cold. I forced it down as best I could.
Our night at Harvest was a real treat all round. The atmosphere was quiet but comfortable, the service warm and capable, and the food strayed only occasionally from being excellent. I may be biased by the particular dishes we chose, but the Harvest chef(s) seemed particularly adept at whipping up delectable and sometimes surprising sauces. Their cream content might be the only thing holding me back from regular visits, if I lived in the neighbourhood. (Because in the bizarre parallel universe where I live in that neighbourhood, I think nothing of eating $20 mains regularly.)
Address: 71 Evans St, Rozelle, Sydney NSW
Ph: (02) 9818 4201
Licensed, BYO wine only
Price: entrees $9.50-$13.95, mains $19-$22.50, desserts $10.90
Posted by Cindy at 9:10 pm