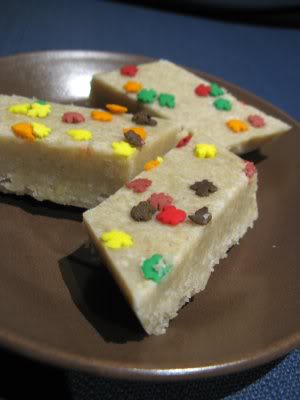 When Steph mentioned that she and her partner D were visiting Melbourne from Perth, I offered to host a vegan potluck in our flat. I was a little anxious about how we'd all fit, but once we pushed all the furniture to the walls and filled our biggest saucepans with curry it was clear that there'd be no problems. Michael and I had proposed an Indian theme and as our guests arrived the table was progressively stacked with onion bhaji, spiced peanuts, stuffed capsicums, chutneys and raita, curries, samosas and roti. Michael chipped in with spiced new potatoes (actually Sri Lankan) and spiced chickpeas, while I fussed over the crockery and mixed up a jug of Indian-style lemonade.
These potlucks usually lead to as much sweet gluttony as savoury but this theme had its limitations - many Indian desserts are milk-based (such as my beloved kulfi and rice pudding, and the super-sugary gulab jamun). Nevertheless, Pip demonstrated that vegan kheer is possible, while Kristy prepared some vegan-friendly carrot halwa. I had a shot at kaju katli, a sweet that I spotted on Vegan Yum Yum some months ago. Even without dairy, it managed to include some of my favourite Indian ingredients - ground cashews and cardamom, flavoured and bound with sugar, salt and water.
I prepared the kaju katli the night before the potluck, with some difficulty. Once all the ingredients have boiled together in a saucepan you're supposed to pour it onto oiled foil and knead it "until glassy" (whatever that means). Obviously anything involving boiled sugar needs to cool before you touch it, so I plonked it onto a foil-lined board and gave it some time. It was during this time that the mixture attached itself quite firmly to the foil. The foil ripped and the cashews clung and I really wasn't sure where to knead the mixture that I had managed to unhinge. There wasn't a lot of mixture anyway, and the amount I could handle was diminishing by the second!
Eventually I came upon a solution - oil spray. I sprayed it on the board, on my hands, and on the paper-lined baking tray I dumped the mixture into. (If I did this again, I'd skip the foil and spray oil into a large mixing bowl, where I'd do my kneading.) I even sprayed the back of the spoon I used to smooth over the cashews once they were in the baking pan. That was when it achieved a smooth, glossy surface and I decided that I must have done something right. After scattering some sugar sprinkles and popping it in the fridge overnight, it was a breeze to slice and serve. The small volume wasn't a big drama - an itsy piece is plenty to round out a meal of potatoes and pastry.

(Steph & Pip have also recounted the evening on their blogs.)

Kaju Katli
(based on a recipe at Vegan Yum Yum, who cites Saffron Hut)

Use a food processor to grind the cashews to a fine powder. Mix in the cardamom and salt.
Stir together the sugar and water in a saucepan and bring them to the boil. Add the cashews and stir the mixture well. Cook for a further 5 minutes, until the mixture has thickened.
Lightly spray a large mixing bowl with oil and pour in the cashew mixture. Allow it to cool until you can handle it; spray your hands with oil and lightly knead the mixture until it forms a ball.
Line a small baking tray or loaf tin with paper and spray it with oil. Plonk in the cashew dough and smooth it down with the oil-sprayed back of a spoon. Decorate with sprinkles or edible foil if you're using them. Refrigerate the mixture until firm, then slice it into diamonds before serving.
Posted by Cindy at 3:49 pm