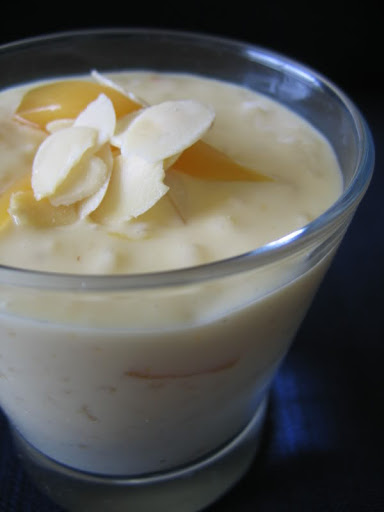 It isn't a themed evening without an appropriate dessert as far as I'm concerned, and I knew just the thing to make. I'd previously trialled this recipe for "Rose and saffron-scented rice dessert with mango" once while in Brisbane. I had had some agreeable creamy rice desserts served with thalis at various Indian restaurants, and I found my home-made batch to be an even more aromatic and satisfying end to a curry meal. The recipe comes from a fabulous and (in this house) well-thumbed cookbook instructively titled "The low-fat Indian vegetarian cookbook", written by Mridula Baljekar. However this is by no means a low-fat dessert: it comes from the more permissive High Days and Holidays chapter at the end of the book.
This dessert is quite simple to prepare and if you're planning to make a main meal on the same night, you can reduce the stress levels even further by doing the first half of the recipe a couple of hours or even a day earlier.
Indian Mango Rice Pudding

Gently heat the milk in a very small saucepan and grind up the saffron a bit. Squishing it between two teaspoons with a small container underneath is a good approach. Stir the saffron into the milk and set it aside.
Get yourself a much larger saucepan (about 2 litres in capacity is good) and melt the ghee, subsequently adding the cardamom pods and cinnamon stick. Use more or less cardamom as you wish, but remember the number that you put in. You'll thank me later. Turn the heat up just enough to get the spices sizzling and infusing the fat with flavour, then turn it down again to low.
Once the ghee has settled down, cautiously add the creamed rice and saffron milk. I say 'cautiously' because the the ghee started spitting at me at this point. Once it's all combined, turn the heat up a bit and add the cream and sugar. If your creamed rice is very sweet, consider reducing or omitting the sugar. Simmer the mix gently, stirring occasionally, for about 5 minutes. Set it aside to cool.

At this point you can plonk a lid on the saucepan and pop it in the fridge for a few hours or even a day. I changed into my most brightly beaded shirt and checked out a Bollywood movie at the festival. Another fine amusement is preparing and devouring a curry as a precursor to dessert.
Mridula's recipe calls for a large, ripe mango and on this day Piedemonte's was selling them for $1.99 each. I confess that I still went for the canned option because I don't really like the intensity of fresh mango (a shameful admission for a girl raised in Queensland). Whatever your choice, cut your mango into small cubes, perhaps saving a bit as a garnish. Retrieve the rice pudding and fish out the cardamom pods and cinnamon (aren't you glad you counted how many were in there?). Stir in the mango and rose water.
Serve in invidual cups, garnished with a few crushed nuts. Pistachios look beautiful against the soft orange of the pudding, but I'd used mine up and opted for flaked almonds instead.
Categories
Posted by Cindy at 12:54 pm