To celebrate our mid-afternoon Indian Film Festival outing (we saw Koi Aap Sa, which is passable, but definitely no Lagaan), we planned an Indian-themed evening of food. I'd already filled up on the Indian chips we'd smuggled into the cinema, so it was quite late by the time I got cracking on my task: Khichari. This is another of Kurma's fine recipes, with a few alterations (for instance, we failed to find mung beans at Piedemontes, and opted for lentils instead). This recipe makes heaps - probably enough for 5 or 6 meals.

I like to get all the chopping out of the way first, so I started out by cutting up a couple of washed potatoes, a big head of broccoli, two tomatoes and a large carrot into bite sized pieces and slicing a green chilli and some ginger finely. You could probably optimise your cooking time by doing most of this while the lentils are boiling, but I'm easily stressed when something's on the stove. Once you're all prepared, throw about 2/3 cup of lentils, a couple of bay leaves, the ginger, chilli, a teaspoon of turmeric and 2 teaspoons of ground coriander seeds into a large saucepan along with 6 cups of water.

Cook for about 15 minutes, until the lentils have softened up nicely and then throw in a cup of rice, all the chopped vegetables and about a teaspoon of salt. Bring it back to the boil and stir everything together, and then leave it simmering for about 15 minutes. In the meantime, heat about 1 tablespoon of ghee in a small saucepan and sprinkle in 2 teaspoons of cumin seeds. Frying until the seeds darken slightly and then throw in a generous handful of fresh curry leaves - they'll make a terrifying crackling noise, but don't panic, they're supposed to. Quickly add in a couple of teaspoons of asafetida and stir it all together before taking it off the heat. Throw the seasonings into the big stew pot and stir it all together - gauge the moistness of the whole thing now, if you want your mush to be mushier, you can add in some more hot water. Cook for another few minutes and then stir in some fresh coriander and serve on chapatis with a slice of lemon. 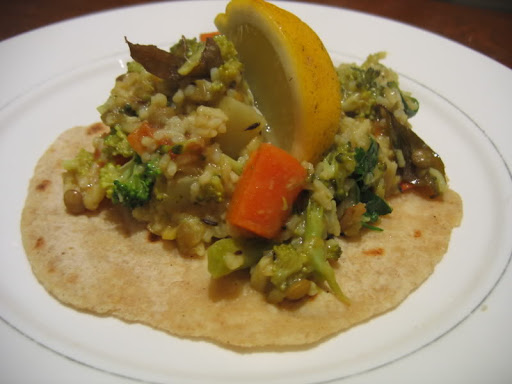 I've made this a few times before and it's always been pretty enjoyable, but for some reason this time it was a little bland - I was probably a bit cautious with the chilli, but I think maybe I just left it all boiling for a bit long. Ah well, nothing a little lime chilli pickle can't fix.
Categories
Posted by Michael at 12:53 pm