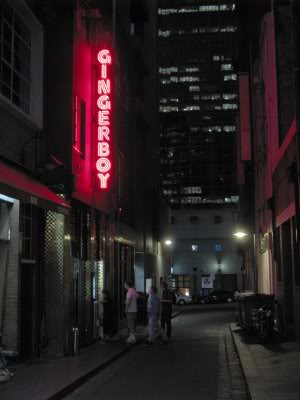 Gingerboy's been kicking around for a few years now. It's received fairly regular attention from food bloggers over that time, and most seem to have emerged with a gripe or two. Surely, though, you're all hungry for the specific vegetarian gripe(s) we might have about Gingerboy, right? Actually, the strange vegetarian gripe I have is that they undersell their veg-friendliness.
It starts with their website. Ezard's other eponymous restaurant clearly spells out its vegetarian menu online, and even notes that vegan options are available. The Gingerboy menu? Trawlers full of seafood and a token tofu dish. The staff aren't any more encouraging. When we arrived with a large group and happily agreed to a banquet, our waiter dutifully jotted down that there were two vegetarians amongst the dozen of us. Preferring to avoid a meat overload, another in the group requested that they serve us 40% vegetarian food. After some consultation this was apparently impossible; first because they couldn't convert a percentage to a number of dishes, and secondly because "40% vegetarian won't be enough variety". Huh? Does that mean that the two vegos at the table were always doomed to a monotonous meal? 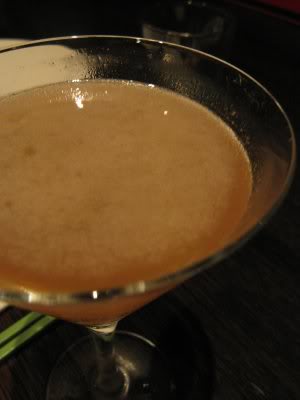 The Gingerboy crew aren't shy, however, about their cocktail menu. It's a tantalising list of twists on old classics and entirely new concoctions (all priced at $17). Michael tried the Mexican cherry blossom, a "tart and fruity" combination of Jose Cuervo traditional tequila, pink grapefruit, lime and strawberry. 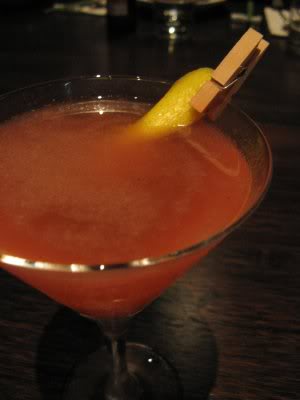 I requested the more manly Glasgow kiss, a terrific sweet and sour mix of Drambuie, Campari, aloe vera, lime and vanilla syrup - finished of with a lemon peel and novelty miniature clothes peg... or peel peg in this instance. 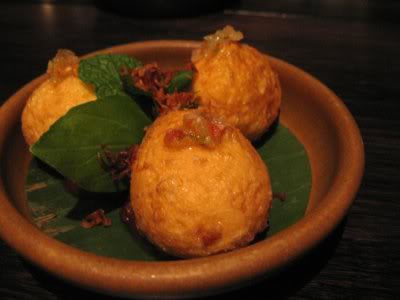 The first dish for all was a vegetarian one - son in law eggs with chilli jam and Asian herbs. These eggs are soft-boiled, crumbed and deep-fried; we were instructed to pop an entire egg in our mouths lest we dribble the liquid yolk. Knowing the limited capacity of my mouth, I did no such thing, spilling nothing on my first bite and making a terrible mess on my second. Oh well - none of the people taking the one-bite approach looked any more elegant than I. 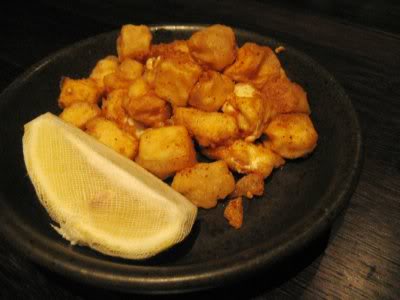 While the others shared cuttlefish, the vegos scored similarly seasoned and battered tofu bites. These were spectacular; piping hot and a little crisp on the outside with a centre of almost-molten silken tofu and a charming hint of spice. Topped with a squeeze of lemon, I daresay these were the equal (if not the better) of the fishy version. 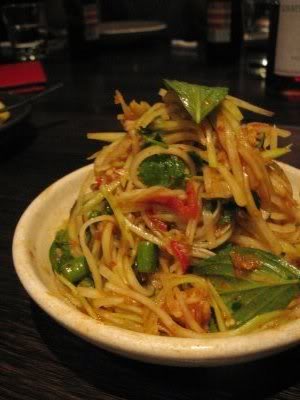 As we politely offered each other the last of the tofu, a few more dishes popped up. Most were meaty, though there was also this green papaya salad, with its perky flavours of lime and basil. Michael warned me that it was rather spicy, yet I happily gulped down three mouthfuls before the chilli hit me. Once that heat turned up, it sure stuck around a while. 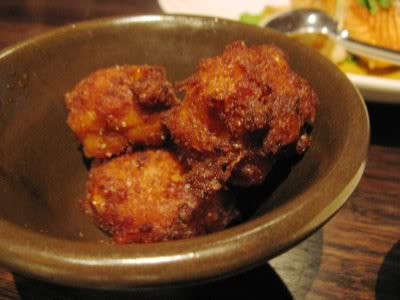 A couple bowls of corn cakes appeared at odd intervals and were very popular. The balance of flavours and textures was completely different to any other corn fritter I've encountered. The corn was so caramelised, and the fritters so salty; the batter so deep-fried that there was as much crispy crust as there was fluffy centre. They were an intense, and intensely enjoyable experience... but it wasn't difficult to stop at two. 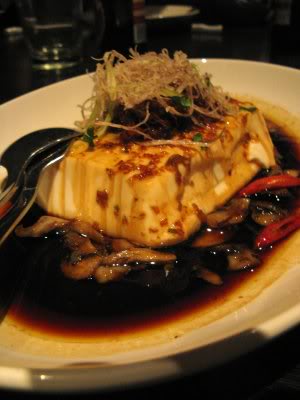 The main dish for the vegetarians was inevitably more tofu. This silken brick of bean curd came with XO sauce and a chilli black vinegar dressing. The deep, mushroomy flavours were a pleasant contrast to the other tofu dish, and we had no difficulties fobbing off the second plateful to the omnivores around us. 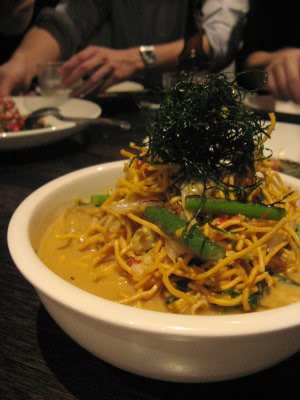 After a puzzlingly long pause (about 40 minutes), we were presented not with dessert, but with more mains! The crispy Singapore noodles were bathed in the tangy-sweet coconut laksa and they concealed a medley of soft vegetables. 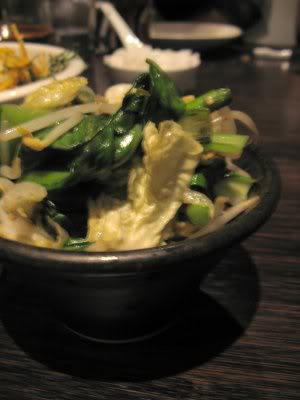 The wok greens had a pleasantly subtle saltiness, but didn't receive priority as most of us filled up. 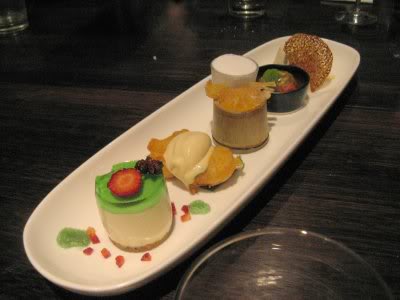 Most of the table was utterly defeated by the time the shared dessert plates came round but, oh, not I! I'd swooned over the online dessert menu before we arrived and was thrilled to have the chance to taste the lot. While others nursed last drinks or sighed at their over-full stomachs, I (with just one or two others) was delightedly picking my way through the tofu cheesecake with pandan jelly (so creamy!), a chilli sugared banana fritter with Baileys icecream (gorgeous texture, but where was the Baileys?), a custard pot with a dehydrated and candied pineapple wedge (amazing... like a chewy toffee), a rhubarb and apple dumpling with coconut sorbet (impossible to share), and a curious sugar pudding. While it was all rather good, I suspect that it was the variety itself that impressed me most. It certainly outdid the sugar-fest we were served up at Ezard.
Gingerboy certainly didn't try to endear itself to me - the backless stools were not designed for an extended meal, references to vegetarian food were somewhat dismissive, and the hipster-bar-with-$30-mains reality doesn't exactly gel with the "South East Asian street food and hawker identity". Yet not only was the banquet tasty, it offered a few surprises along the way and was fun - the right fit for this rowdy birthday party.
Address: 27-29 Crossley St, Melbourne CBD
Ph: 9662 4200
Fully licensed
Price: banquet $65 per person, cocktails $17
Website: www.gingerboy.com.au
Posted by Cindy at 9:51 pm