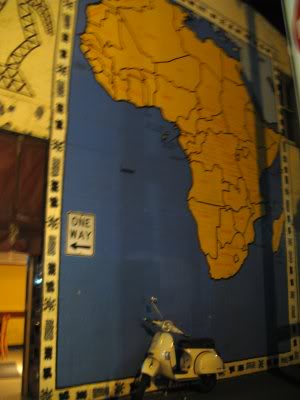 Saturday night saw us exploring King Street in Newtown. We couldn't convince our gaggle of omni friends that Green Gourmet or Basil Pizza were worth visiting, but once someone muttered something about African food we quickly reached consensus. Our Sydney-based hosts pointed us in the direction of Le Kilimanjaro with a few reservations, but their slight ambivalence wasn't enough to dissuade the rest of us and we settled quickly in.

The restaurant is comfy and atmospheric, with various African-themed wall decorations and the staff wandering around in traditional African ensembles. I'd been expecting something similar to our Ethiopian dining experiences, but Le Kilimanjaro serves up food from East Africa including Ghana, Senegal and Kenya. The menu is posted up on a big board with helpful descriptions of the many dishes available (including a dish with a name that literally translates as 'homosexual tuna'). We weren't overwhelmed by vego options, but there were a decent number of side dishes available and at least a couple of mains.

Cindy stuck entirely to the side dish menu, opting for Accara (black-eyed beans soaked overnight and then ground with mild African spices, fried in round balls and served with aromatic sauce, $6) and Batansey (fried eggplant in a mildly spiced sauce with onions, $6) dished up with a serve of African flat bread ($2). 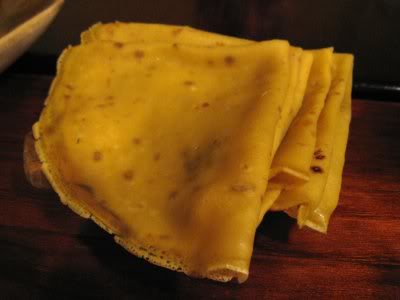 The flatbread is a bit different to the Ethiopian injeera - based on cous-cous grain blended with onion and spices. It's a bit denser than injeera and didn't quite measure up for Cindy. 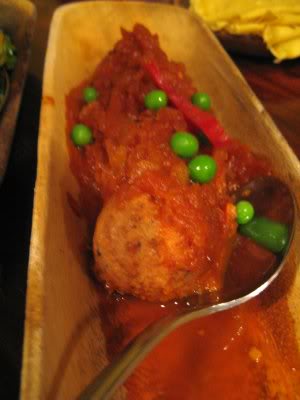 The bean-based balls were also a tad on the diappointing side - the sauce was a lightly-spiced tomatoey sensation, but the balls themselves were a bit heavy and dry. They took a bit more chewing than we expected. 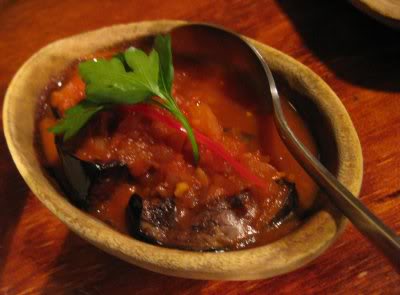 The best of Cindy's bunch was the eggplant dish - a saucy stew filled with chunks of deliciously fried eggplant and heavy on the onions. I only snuck a little taste, but it hit the spot quite nicely.

I decided to brave both a main dish and a side - Ndambe (mid-African spices, lentils, tomato, kidney beans and vegetables, $9.80) and Mboum (cruncy African spinach with a romantically spiced sauce, $6), with a small serve of cous-cous ($1.50). Unfortunately things came out in a fairly shambolic way, with the spinach arriving ten minutes before anything to accompany it and the cous-cous only turning up after I was well into my stewy main. 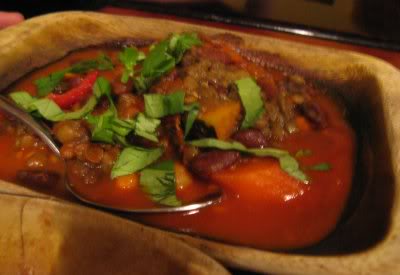 Despite the slightly ramshackle service, my food was outstanding - the Ndambe was based on a richly spiced tomato sauce and was overflowing with beans, lentils, chunks of vegies and a sprinkling of fresh herbs. Once I had some cous-cous to soak up the sauce, I was a happy man. 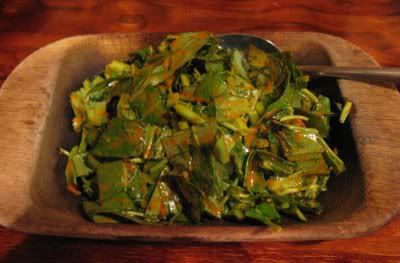 I was even happier once I chomped into my spinach side - it's a very simple idea, take some crisp greens and coat them in a mildly spicy sauce. Simple and very effective - the spinach was everyone's favourite dish, and the fresh greens complemented the heavy stews that made up most of the evening's meals.

Le Kilimanjaro is a BYO place, with just a couple of options on the drinks menu. Cindy's 'ginger drink' (freshly squeezed ginger with vanilla sugar) was incredibly gingery and strong, but as refreshing as the menu promised. 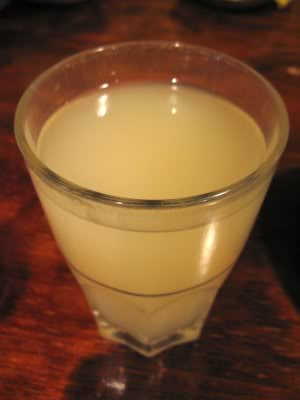 My mysterious 'African flower drink' unfortunately never arrived, so it remains an unknown quantity. Maybe they were out of flowers.

Despite some fairly 'relaxed' service, the food (and the prices) meant that nobody walked away too disappointed with Le Kilimanjaro, but if we're ever seeking African food in Newtown again, we'll probably walk the other way along King Street to African Feeling.