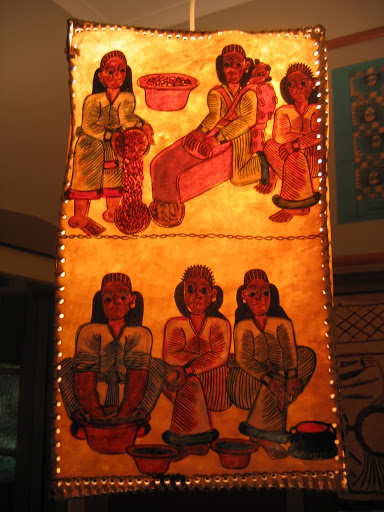 The Horn in Collingwood is a stange hybrid of African cafe and jazz bar. It's cosy, with a couple of linked rooms and is atmospherically decorated with a combination of African and jazz-related paraphernalia. Cindy discovered it via 1001 Dinners, 1001 Nights and decided it was worth a visit. I wandered in around 7 to meet Cindy and a group of friends for dinner and the friendly and relaxed staff set me up at the back corner table with one of the organic Ethiopian beers that they offer. I could have quite happily sat there and relaxed all evening, but eventually everybody else arrived and we could get down to the business of eating. 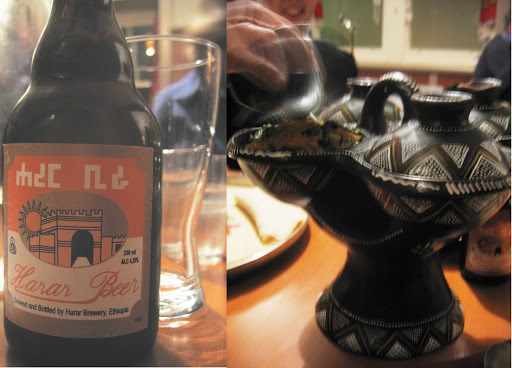 The menu contains a fairly extensive range of Ethiopian snacks and meals, with a reasonable number of vego options. It was hard to go past the vegie and dahl combination, which Cindy and I shared, - a chance to try five of the dishes on offer without eating until bursting point. Our waitress explained the traditional Ethiopian style of eating where stews are placed on top of giant pancakes (injera) and eaten without implements - the injera providing something with which to pick up the liquidy meals. The pancakes arrived on large pizza trays, complete with a salad garnish and a couple of rolled up injera for extra grabbing power. To accompany this great expanse of breadiness, we got a selection of three vegie stews and a couple of dahls. Four of the dishes came out in a stylish little serving device, while the fifth languished rather sadly in a plain bowl. The food was tasty without being particularly mindblowing - most of the fun came from digging around with the injera and generally making a ridiculous mess. 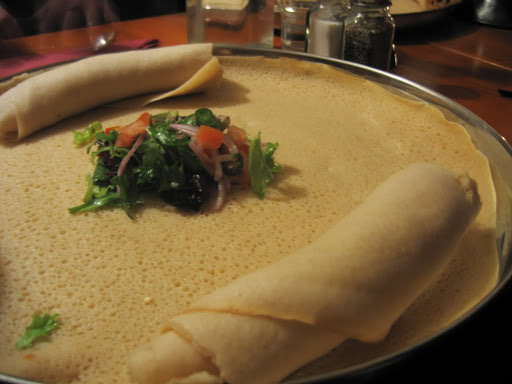 With a few more organic beers (including a very nice stout) under our belts and the last of the sauce-soaked injera devoured, we were just settling back in our seats when the tiny spare space next to our table was transformed into a makeshift stage and out came the band (one of whom doubles as the proprietor of the venue). We shuffled ourselves across to a table a little bit further away to give them some room and then sat back as they played a fantastic 40 minute set of rhythmic jazz. It killed off our conversation, but nobody really minded - the music had us all transfixed.

We snuck out in their break between sets (some of us to head off to bed and other, less responsible types to push on to more live music and beer further into Collingwood), happy with a good meal, some fine company and an unexpected burst of enjoyable jazz. The only (slight) downside of the whole evening was the unexpected cover charge we had to pay for the band. It wasn't really a problem, but it's probably a good idea to let people know that there's going to be an extra charge for staying in the restaurant after a certain time. But that was a minor quibble - The Horn has all the ingredients for a very satisfying night out.