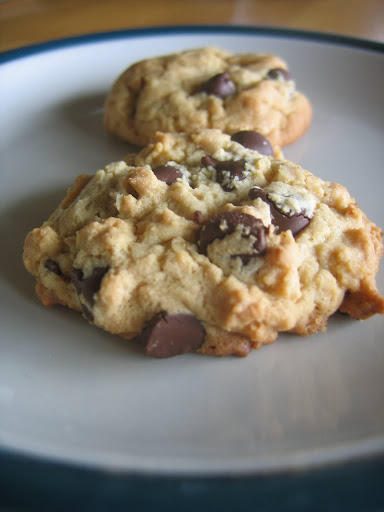 This weekend brought two holidaying couples from Brisbane and two road trips! First up, Michael and I took a day or so leave from work so that we could travel to Wilson's Promontory with Jack and Emma. Long before I got excited about long walks and birdwatching, I enthusiastically set about preparing the weekend menu. Featuring high on my list of things to make was this recipe, originally dubbed the Team Cookie by a teammate of basketballin' Brilynn from Jumbo Empanadas. I can only imagine how great these taste after the exertion of a game of basketball, and they're just the thing after a hike through the Prom. They're also a pretty sweet break in the monotony of a long drive!
The recipe itself bears a remarkable resemblance to my long-standing favourite choc-chip cookie recipe, both in the ingredient list and the quantities: the major differences are that chopped almonds are replaced by crunchy peanut butter, and the rolled oats remain whole (instead of being ground to a powder). I was looking forward to that peanut butter taste and chew, but it was a much milder component than I expected - I might experiment with increasing it (even reducing the butter) next time. I was more skeptical about the whole oats, but they did lend an agreeable chew; I'm undecided whether I prefer them pulverised or not. I also cooked these a little longer than I should have - none of them burned, but they were all very crunchy from the moment they were cool. 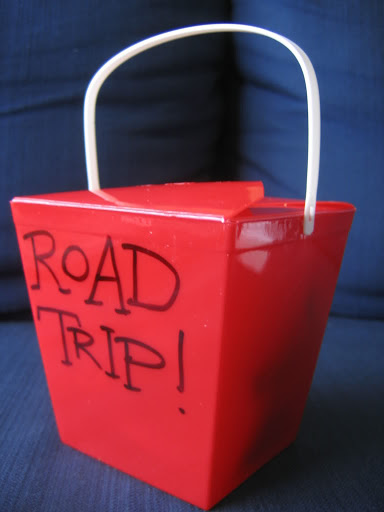 Regardless, these were very popular all round. We polished off a lunchbox full of them on our weekend, and when we met up with Beth and Ryan (more food fun with them coming up!), I filled a noodle-style gift box with them for their own impending road trip along the Great Ocean Road to Adelaide. My workmates happily demolished another entire lunchbox-full for afternoon tea a few days later. Can you believe that still left another dozen for Michael and I, back at home?

Preheat the oven to 180 degrees C.

Beat together the peanut butter and butter, then add the sugars and continue beating until fluffy. Beat in the eggs one at a time, and then the vanilla.
Sift the flour and baking soda, stir in the oats, and then stir these dry ingredients into the sweet butter mixture. Finally stir in the chocolate chips.
Brilynn suggests that if the dough is really sticky you can add more flour here. My mixture was quite sticky but I powered on without any more filler! Use two teaspoons to drop the dough onto an ungreased baking tray. The front cookie pictured above was done like this - the neater, rounder one behind came from gently rolling the dough in my hands.
Bake for 10 minutes until lightly browned. I'll echo Brilynn's emphasis on not overcooking these: in fact, I might only bake mine for 8-10 minutes next time for a chewier cookie.
Posted by Cindy at 12:23 pm