The old Aboriginal Health Service on Gertrude Street has been something of a landmark, despite sitting empty for more than a decade. The giant red, yellow and black facade was a reminder of pre-gentrification Gertrude Street and a symbol of the close connection Indigenous Victorians felt to the area. So there was a bit of community consternation when Mission Australia was given a 10 year lease on the building late last year. While it remains problematic that some local Indigenous groups were unhappy with how this crucial part of their local heritage was passed on to a non-Indigenous group, the basic premise of Mission Australia's newly opened restaurant, Charcoal Lane, is a positive one.

Taking some inspiration from Fifteen, Charcoal Lane has been set up to provide a place for Indigenous young people to receive training in the hospitality industry, under the supervision of some of Victoria's finest restauranteurs. It's a fine idea, and hopefully one that pays off over the coming years. The restaurant, named after the nearby lane where local Indigenous people congregated, produces slightly fancy Australian-inspired meals, with a preponderance of fish and meat dishes. Vegetarians get a few decent options, but are limited to appetisers and entrees. 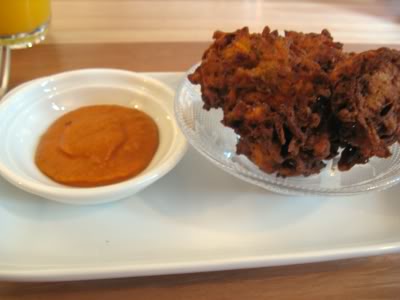 I took advantage of the $35 two-course lunch offer, starting off with some spiced yam fritters served with a bush tomato chutney. The yams were slightly sweet with a depth of flavour added by some unidentified spices, and were dunked liberally in the slightly smokey, tomato chutney. They were similar in structure to a bhaji, and I immediately lowered the tone by eating these with my fingers - I'm sure I'd have made an even bigger mess with cutlery. 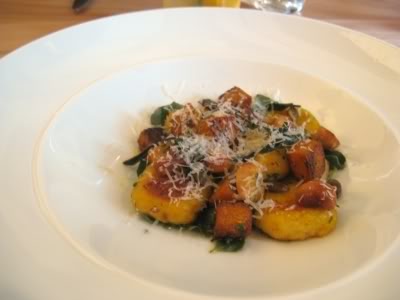 The vegie main on offer (an upsized entree) was a pumpkin gnocchi, with fried sage, macadamia nut butter and saltbush. I'm often annoyed by the fallback of meaty restaurants on gnocchi or risotto for their vegetarian offering, but this was a revelation - crispy little pillows of pumpkin gnocchi, surrounded by a glorious combination of flavours. The fried sage and the saltbush contributed a kind of fancy salt and pepper combo, while the chunks of macadamia and the macadamia butter were rich and smooth. I could have eaten two bowls.

They also offer a black rice risotto, which looks amazing (alas my photos do not), but was apparently a little on the bland side.

We had a very satisfying (and upmarket) meal at Charcoal Lane. The restaurant is only open during lunch until mid-August, when they will extend their hours to dinner and weekend breakfast. Similarly, they're still going through the process of getting a liquor license. Regardless, it would be well worth sneaking in there for a quick lunch now, before word gets around and the place starts to book out.