Perhaps you've noticed the declining frequency of blog posts appearing here these last six weeks. (Hopefully you haven't noticed a decline in enthusiasm within those few posts; we still love doin' what we do here.) There was that holiday, and then we accommodated friends for a few weeks while they searched for a more permanent Melbourne home - their contrasting eating habits altered our own. Michael disappeared to Queensland for almost a week and I worked long hours, subsisting on soft tofu tacos and brightly wrapped items that could just barely be described as food. I was working towards my own trip to Queensland, where I wanted to pack as much family, friends and food as I could around a conference.
And I did. I saw old family friends, new babies, people I've known since we were children ourselves, and I was utterly spoiled with their home cooking. Chocolate date cake, sesame-crumbed felafel, cheesecakes and gnocchi, afternoon teas and punnets and punnets of new-season strawberries. All the while the sun shone, unseasonably hot.
Have you attended many conference dinners? I've been to a couple of crackers, but many more disappointments. (It must be difficult to arrange an accessible venue, entertainment, and simultaneously serve pleasing meals to several hundred delegates.) This time a few colleagues and I decided instead to spend what we could have on that conference dinner, on a smaller but special dinner elsewhere. 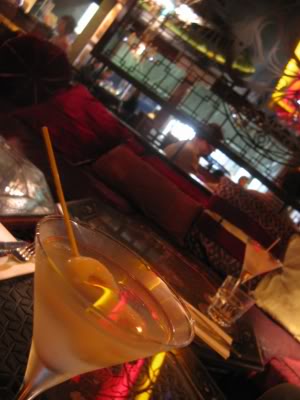 It started at the Lychee Lounge. This bar was open on Boundary St for all the years that I lived in West End, yet I never stopped in for a drink. Its hip cocktail lounge style, common in Melbourne, wasn't my scene - I was a frugal full-time student, more casually dressed than the stilettoed girls visible out front (still am) and the Pavilion across the street offered cocktails at half the price on Sunday evenings.
I can now confirm that it's a lovely spot to settle in with friends, drinks and even a few snacks. The cocktail menu is extensive and not unreasonably priced - I sampled their signature drink, the Lychee Lounge Martini, with lychee-infused vodka, lychee juice, triple sec, a squeeze of lime and a frozen lychee garnish ($13). The snacks are deliciously pretentious - I couldn't get enough of the honey and shichimi crushed potato chips, served with tomato jam and lemon mayo ($7).
____________ 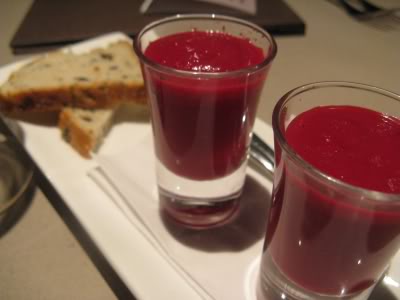 The main event, though, was dinner at Mondo Organics. Having enjoyed a few brunches and one terrific cooking class at Mondo when I was a local, I was looking forward to this meal. I always remembered their efforts to cater for vegans and coeliacs and with their devotion to local produce, it seemed a good choice to share with some interstate vistors too. The Mondo folks got us started with an amuse bouche of blended beetroot and goat cheese with a acidic kick and slender spelt bread side. 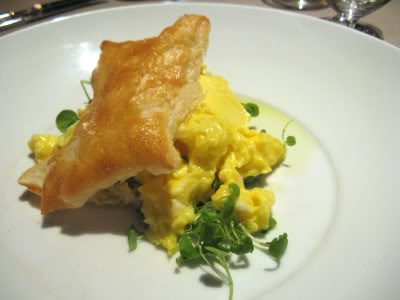 One of the evening's specials was truffled and scrambled duck eggs served with puff pastry - a deliciously rich dish. 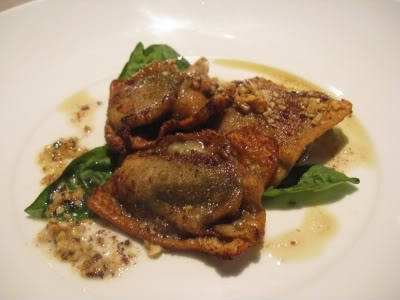 Another memorable entree was the spelt ravioli filled with Stilton and quince, walnut oil and opal basil ($18) - the nutty crispness on the outside perfectly offset the oozing cheesy filling. 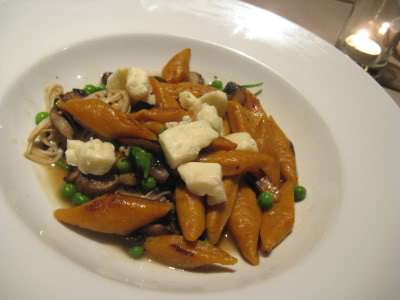 The featured vegetarian main of the season was sweet potato gnocchi with tallegio, peas, enoki mushrooms and oloroso sherry ($28). I was immediately impressed with the depth of flavour in the stock-like sauce - it's a bit of a rarity when there's no meat involved. The gnocchi were smooth and silky, and the peas and mushrooms worked well. I surprised myself by setting aside much of the cheese; it was just too intense up against that sherry-soaked sauce. 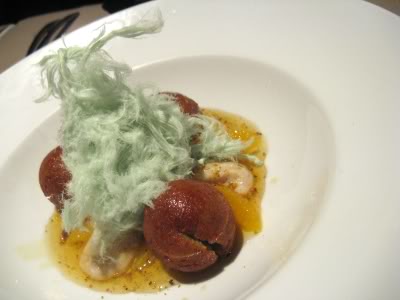 Across the table we tried two of the desserts. First up, orange blossom dumplings with poached orange, whipped vanilla tofu and pistachio ($14.50). Though they looked like little doughnuts the dumplings had a course heaviness that reminded me of a flourless orange cake; everyone loved the pistachio-flavoured fairy floss garnish. 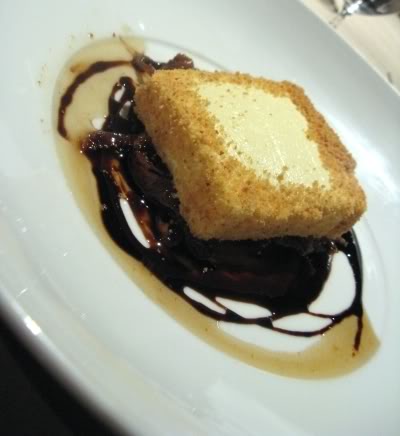 More impressive still was the amaretti-crumbed goat's curd cream cheesecake, served with fig compote and vincotto coulis ($14.50) - a stunning, slightly sweeter alternative to finishing up with a cheese platter.

Our meals at Mondo were unrelentingly rich. There were a couple of minor disappointments amongst the dishes and some overindulged stomachs by the end of the night, but these were eclipsed by wonderful entrees and really creative desserts.
____________ 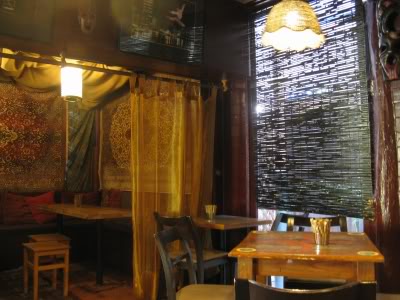 A cheaper way to treat yourself in West End is to head to Three Monkeys Coffee and Tea House. The rambling rooms offer plenty of nooks to share secrets and enormous slabs of cake with a friend. Further out back is a leafy courtyard, where you can sip tea and play backgammon. 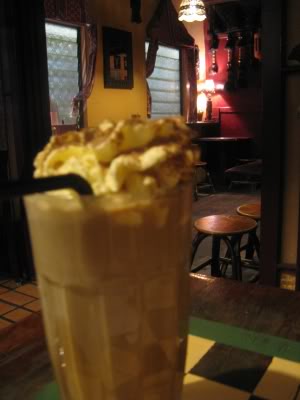 Air-conditioned indoors and well-shaded out back, it's one of the coolest, calmest places to be in the height of this city's summer. And in spite of the heat, I couldn't have felt cooler or calmer after my fortnight catching up with Brisbane.
Posted by Cindy at 8:29 am