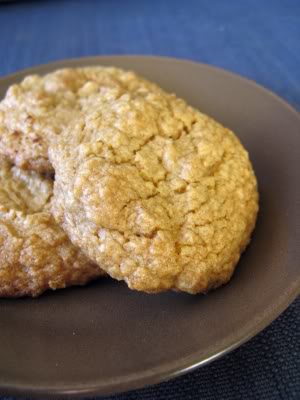 Browsing through the archives, I see that this isn't the first time I've baked and blogged peanut butter cookies. But this recipe, from 101 Cookbooks, distinguishes itself as a healthier, veganer version - something I'm happy to pack for my mid-afternoon munchies at work. A little olive oil augments the peanut butter for the fattiness, sweetness comes from maple syrup, and the flour is 100% wholemeal.
If nothing else, these cookies have demonstrated how my eating preferences have influenced Michael over the years; when I first met him he had minimal interest in dessert. Yet on Monday night after dinner it was he who rummaged through the kitchen seeking something sweet, ultimately lamenting that these cookies tasted "too healthy". I don't know about that, but they're not quite as sweet as your typical American-style cookie (which I don't think is anything to be ashamed of) and the wholemeal flour certainly adds some weight and chew to them (which I want when mild mid-afternoon hunger strikes).

The dough comes together easily by hand and is a little sticky (though the five minute rest allows it to dry out a little). It expands quite a bit in the oven so spoon small and leave plenty of space on the tray! These cookies are moist and just a little crisp on the outside. They're very nearly fantastic. The one thing that doesn't quite sit right with me is the use of maple syrup to sweeten the peanut butter - they mellow and intermingle over a few days, but it's not the same as the peanut butter-brown sugar partnership I'm accustomed to and will probably revert to. Regardless, it's a splendid recipe and one that Heidi has taken a lot of time, patience and flour to perfect - any improvements will be incremental and serve only my very specific, personal peanut butter cookie expectations.

A healthier peanut butter cookie
(a recipe from 101 Cookbooks)

Preheat the oven to 180°C and line a baking tray or two with paper.
In a smallish bowl, stir together the flour, bicarb soda and salt. In a larger bowl, stir together the remaining ingredients until well combined. Stir the flour mixture into the peanut butter mixture until just combined and allow the dough to rest for 5 minutes.
Drop spoonfuls of the dough onto the baking trays, leaving plenty of space for expansion between them. Bake for about 10 minutes, keeping a close eye on them from the 8 minute mark onwards. Allow the cookies to cool on the tray for 5 minutes before transferring them to a rack.
Posted by Cindy at 9:12 pm