Mike and Jo typically share each other's meals whenever they eat out but negotiations became far more complex (albeit more polite) when they joined Michael and I for dinner at Enlightened Cuisine. Each individually wanting to try as many dishes as possible, our best strategy had to be a group ordering consensus. We eventually got there, with the help of a pot of tea and some patient wait staff. 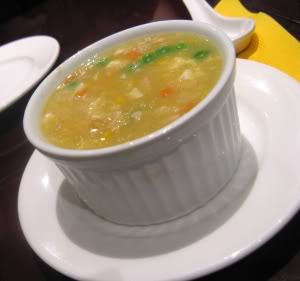 The first dish to arrive was sweet corn soup for Jo ($5.50). Carrying tiny tofu cubes and shredded mock chicken, she was quite happy with this one and the rest of us enjoyed a taste too. 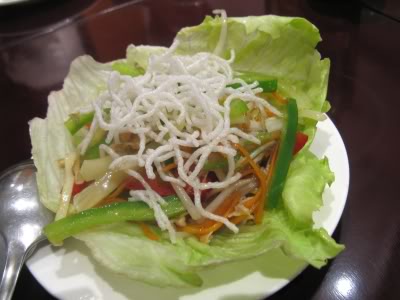 Lettuce cups ($4.50 each) offered some nice crunch, though the flavour was weak and salty. 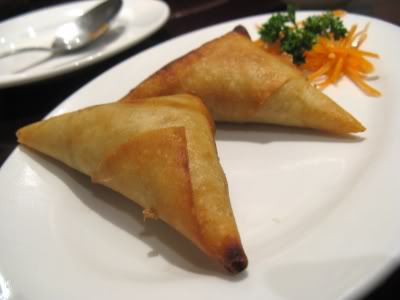 Mike's curry puffs ($4.50 for two) weren't quite what he'd hoped, either. Though he was expecting puffy Indian-style samosas, these turned out to be small but dense triangles of filo-style pastry. They at least had a pleasantly spicy vegetable filling. 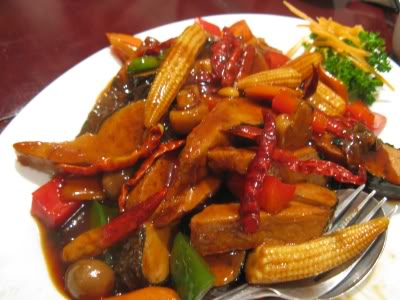 When it came to mains, Michael was most adamant that we would have Kung Po Fish ($16.90). The faux fish (Lamyong-style pieces) were accompanied by plenty of cheery vegetable chunks and almost as many whole dried chillis! Michael's convictions were well-founded, with this dish being one of the night's best. 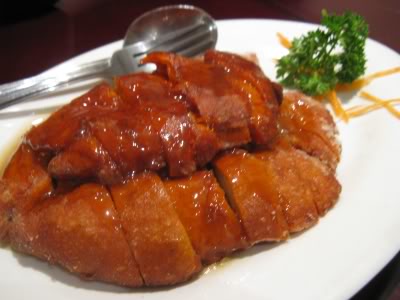 The plum sauce duck ($16.90) was popular too, maintaining its crispness under a light but syrupy sweet sauce. 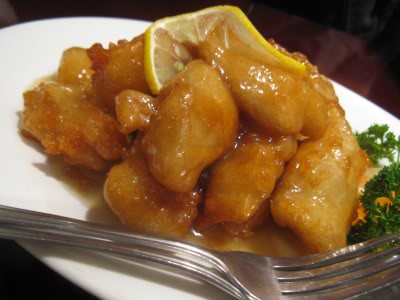 Jo and I agreed that some nostalgic lemon chicken ($16.90) was a must. The sauce was impressively acidic and naturally hued; unfortunately the chicken was stodgy, almost gluey in a too-thick batter. 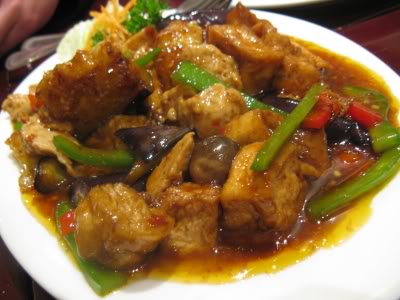 Our last main was the spicy eggplant ($16), recommended by Lisa. It did indeed have a nice kick to it, and the eggplant was at optimum melt-in-the-mouth texture. Also along for the ride were tofu chunks and more mock meat.


Though Jo had staked a claim on deep-fried ice-cream early in the evening, none of us could cope with the thought of it after such a feast. Even sharing amongst a group, it seems impossible to sample the Enlightened Cuisine menu to full satisfaction!
____________


You can read about our previous visits to Enlightened Cuisine here and here.
Posted by Cindy at 8:37 am