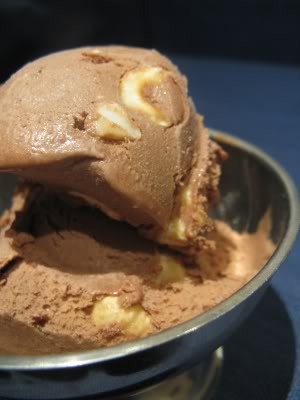 When Michael went away for work for a few days, I too worked. A lot. My usual 7-8 hour weekdays stretched to 9 or even 10 hours, I spent much of Saturday in the office and even blew off a friend's birthday drinks to review an article on Saturday night. I returned to the office on Sunday morning, but before immersing myself in equations I made a plan. I would go home early, sink into the couch and watch a doco (where the maths is so much more beautiful than mine) and cook something fabulous, just for me. It was time to break out Clotilde's simple-yet-stunning nutella icecream recipe.
How simple, you ask? Here it is, in 12 words: whisk together equal weights nutella and evaporated milk; chill, churn and freeze. Sure, you can embelish it - go for a high-end nutella alternative or, as I did, add some chopped hazelnuts for a bit of crunch - but the core recipe is pretty special just on its own. And just how stunning? Licking the drippings from the bowls and utensils was enough to satisfy me that day, though I felt compelled to have a little taste 4 hours later, when the texture was likely to be at its peak. It was like something from a dream, with the rich fluffiness of a chocolate mousse - I was disappointed that my full stomach precluded me from eating any more.
But, wonder of wonders, the texture was very nearly as good more than 48 hours later when Michael joined me for dessert! While most homemade icecreams freeze hard and dense, this one is scoopable straight from the freezer. (I've tried not to muse too long or deeply about which of nutella's highly processed, nutrient-scarce ingredients has that effect.) Rich and sweet, it's also very, very easy to stop at one scoop. Simple recipe, stunning results, built-in portion control - is there anything that Clotilde's nutella icecream can't do?
Posted by Cindy at 8:02 pm