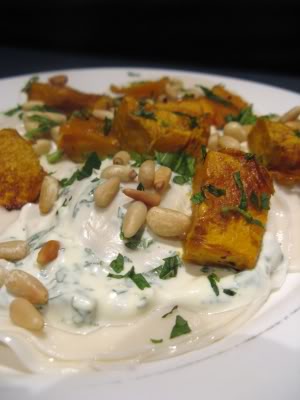 Before I'd even begun making August's calendar recipe, I knew I'd enjoy the flavours. The pumpkin, ricotta and pine nut ravioli filling bears a striking resemblance to some canneloni filling I ad-libbed and blogged a few years ago. One key difference is the use of mint here instead of basil, and its a refreshing alternative.
I embarked on this dinner with a little trepidation, too, due to a previous experience. I once used wonton wrappers to make ravioli, finding them awkward to assemble and somewhat unpleasant in texture. On her blog, Haalo helpfully pointed out the difference between wonton and gow gee wrappers, so I was able to carefully track down the latter from a local grocer. They're round, and perhaps a little thicker. Though there were a couple of nerve-wracking moments along the way these were quite successful. I still think I'd revert to canneloni shells if I made these again.
The one major change I'd make, though, is to the garlic. None of it is cooked in this recipe, and it has a stinging pungency that overwhelms the meal (and your digestive system for hours, even days, later). All you'd need to do to tame it is throw the skin-on cloves into the oven with the pumpkin. I've made this change to the recipe below, since I expect that most eaters would prefer to taste the ravioli this way.

Preheat the oven to 190ºC and place a baking tray in the oven to heat up.
Peel the pumpkin and cut it into 8 slices. In a bowl, lightly coat the pumpkin slices with the olive oil and season them. Remove the hot tray from the oven, arrange the pumpkin slices and the garlic cloves on it, and return the tray to the oven. Bake until tender, turning the pumpkin once - we baked ours for roughly 15 minutes, turning at the 10-minute mark (the garlic may take less time). While they're baking, gently dry-roast the pine nuts in a frypan.
Set half the pumpkin aside (we kept it warm in the now-turned-off oven), and mash the other half of the pumpkin. Peel and mince the garlic. Stir the ricotta, half of the pine nuts, two thirds of the garlic and the nutmeg into the mashed pumpkin.
Set out half of the gow gee wrappers on a clean bench and a small bowl of water to the side. Place a teaspoon of pumpkin filling in the centre of each wrapper. Lightly brush the edges of each wrapper with water and place a second wrapper on top, pressing down the edges to seal in the filling, and pushing out as much air as possible.

For the dressing, whisk together the remaining garlic, yoghurt and mint. Chop the remaining pumpkin into bite-sized pieces.
Bring a large saucepan of water to boil and gently place the ravioli in it. Cook them for about 3 minutes, or until they float to the surface. Scoop them out with a slotted spoon and arrange them on plates. Spoon over the yoghurt dressing, scatter over the pumpkin pieces and remaining pine nuts, then garnish with more mint.
Posted by Cindy at 2:03 pm