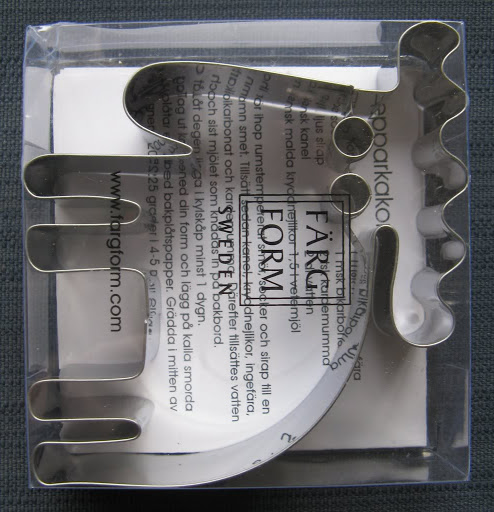 Michael returned home from Sweden with more than just a bunch of statistical models - he also brought chocolate and this little fella, a moose-shaped biscuit cutter with an accompanying recipe in Swedish and English. Noticing that the spiced biscuit recipe was eggless and could easily be made vegan, I saved it up for a picnic Michael was organising. 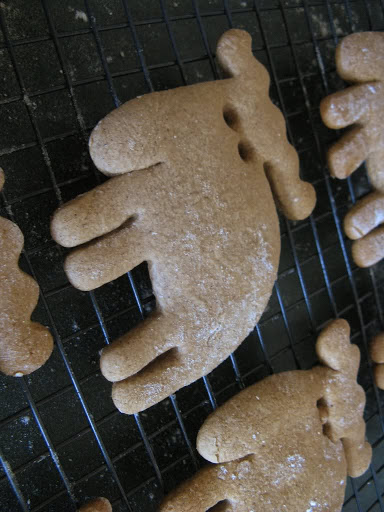 When it comes to baking biscuits, I tend to go for recipes that involve just blobbing batter onto a tray. Flouring, rolling and cutting can leave me a bit frazzled, and I certainly did my fair share of swearing at these! While the mixture was quite pliable and easily rolled, it was harder to shift these large yet delicate shapes from bench to tray without rendering them much less moose-shaped. The eye cut-outs left very little dough to support the antlers. Some crazed flour-scattering seemed to help, and my last couple trays of these didn't look too bad.
The biscuits require very little time in the oven, and ours ended up with at firm crust and moist, somewhat chewy interior. The overwhelming impression, though, is of cardamom! With a full tablespoon of the stuff going in, you're hard pressed to detect the cinnamon, cloves, ginger, or anything else much at all. It makes for a slightly one-dimensional experience, and I couldn't help thinking that their dry spiciness might be more enjoyable with a scoop of vanilla icecream.

What's left me completely flummoxed, now that I'm writing about these biscuits, is where I put the recipe! Michael and I have searched our flat up and down for that little white square of paper to no avail. Perhaps it will show itself this week, in the frenzied lead-up to our rental inspection on Friday - if it does I'll post it here. Otherwise, there are many other recipes for pepparkakor on the internet, though none of the ones I've seen have quite the same ingredient list.

Edit 04/04/09: Somehow the recipe reappeared last night, on our coffee table, in between pieces of brand new mail. It was eery, but cool. Looking at the recipe now, I'm pretty sure I halved the quantities below and still had lots and lots of pepparkakor to share around.

Cream the butter, add castor sugar and syrup and beat in the flavouring - cinnamon, ground cloves, ground ginger, cardamom - and the bicarbonate of soda. Add the water and work in the flour and knead well on a lightly floured surface. Put the dough into the fridge and let rest for at least 24 hours. Roll out the dough thin and cut out biscuits with your mould and put them on a cold buttered baking sheet or on a baking sheet lined with paper. Bake in the middle of the oven at 200-225°C for 4-5 minutes.
Posted by Cindy at 1:59 pm